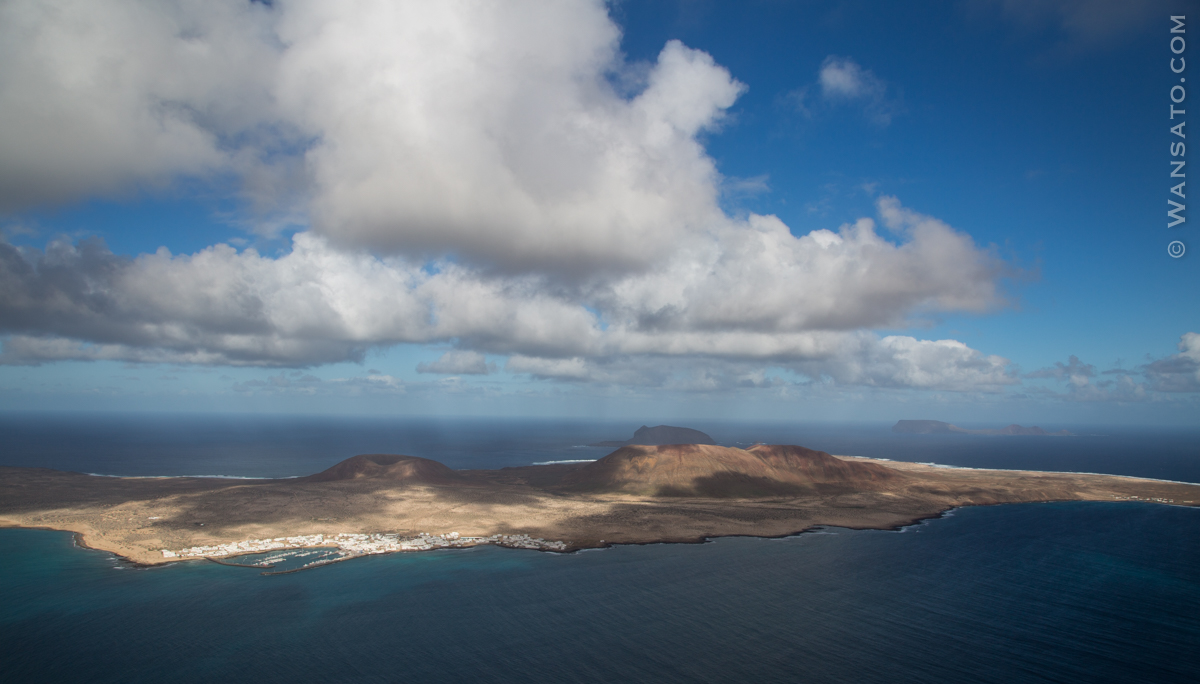 Only one hundred kilometres from the Moroccan coast, the Canary Islands, of which Lanzarote is a part, are known for the beauty of their almost lunar landscapes, their beaches and especially their sunshine.

hurch bells are ringing in the small town. It must be around ten o’clock on Monday morning. The sun is out, the sky is clear of almost all the white cotton wools that look like clouds. The sea air with its slightly salty taste invigorates the spirit. And in spite of the small wind blowing from the coast, it is nice in Teguise for this month of December. A simple jumper is enough, the sun doing the rest. The square of the small village in the heart of the island is deserted. It is a normal day on the island of Lanzarote, in the Canary Islands.

After a few dozen minutes of winding roads through a near desert of rocks and dust from Arrecife – Lanzarote’s main town – the bus stops in Teguise, which seems to be the very definition of a typical small Canary Island town. Its church built from the island’s volcanic rocks, its beautiful white painted houses and the absence of traffic, horns and any other noise except the wind give an extraordinary sense of change and calm. Life in Teguise seems peaceful, although it can’t be easy every day. The economy of Lanzarote has become almost totally dependent on tourists, so the low season reduces the island’s activity considerably. The first excursion organised by MSC for this week’s Canary Islands trip is the exploration of the volcanic island of Lanzarote and its secrets.

“Teguise is one of the oldest towns in the Canaries. It was built around the 15th century by Maciot de Béthencourt, a Frenchman, and was for a long time the capital of Lanzarote”, explains Franz with his sunglasses and long hair in the wind. Franz will be our guide for the day. He is German and is the guide for most of the giant ships like the MSC Armonia that dock in the port of Arrecife. With his German accent he continues to explain the history of the small town: “Teguise has not always been so peaceful. It was attacked several times by pirates from the nearby West African coast. Now everything is much calmer. Here we are in the Plaza de la Constitución in front of the most famous building in Teguise. It is the church of Nuestra Señora de Guadalupe. Franz’s story comes out mechanically and seems to be memorized, we must not be the first to make this visit, nor the last.

Probably built around 1428, the church of Nuestra Señora de Guadalupe is a magnificent building that perfectly combines the dark colour of Lanzarote’s volcanic rock with the whiteness of its bell tower. The church was destroyed during the pirate attacks on Teguise and was restored to its original appearance in the 1990s. Unlike the houses in the northern part of Europe, almost all the houses in the south are painted white to allow the best possible reflection of the sunlight, and thus to ensure a cooler interior. “I will give you forty minutes to walk around the city. Be on time or the bus will leave without you,” says Franz, laughing. Not so sure it’s wrong, after all.

Forty minutes to enjoy the quiet of the city. Getting lost in the small streets of Teguise is a relaxing activity. A few small cafes that have remained open for the winter serve the few tourists with drinks and small delicacies. The middle of December is certainly not the high season. Almost all the houses have been christened and have their name on a ceramic plaque next to the entrance. The streets are almost deserted and the only face-to-face people are the other tourists on the bus visiting the city. Teguise is quietly waiting for summer.

César Manrique in the spotlight on Lanzarote

“The word Rio (‘river’ in French) refers to the two-kilometre wide inlet between Lanzarote and the island of La Graciosa and symbolically represents a river,” explains Franz, as he gets off the bus. “The Mirador Del Rio was inaugurated in 1974 by the Spanish architect and artist Cesar Manrique, who left a huge artistic mark on the island of Lanzarote. This afternoon we will visit other works created by the artist. Take time to enjoy the view, we’ll see you in an hour. What is most surprising is the total absence of right angles in the Spanish artist’s construction and its perfect integration into the surrounding cliff. A bar allows you to enjoy the splendid view and the combination of the wood and the white ceiling makes the Mirador Del Rio a unique place. The spiral staircase in the middle of the room leads to the souvenir shop and the outdoor platform. Outside, the clouds and wind give an almost desert-like appearance and accentuate the relief of the small hills blackened by volcanic rock. Almost no vegetation grows here and the Mirador Del Rio seems to be lost in the middle of nowhere, on the edge of a precipice.

We leave the Mirador Del Rio for our last stop of the day before reaching the huge ship Armonia and its three thousand four hundred passengers and crew. Another work of Spanish architect and artist Cesar Manrique, Jameos Del Agua is undoubtedly the flagship destination on the island of Lanzarote. In the same style as Mirador Del Rio, the contrast between the dark colours of the volcanic rock and the white of the architecture makes the whole thing simply sublime. “Jameos Del Agua was originally part of the largest lava tunnel in the world. Imagine, more than six kilometres long! In some places it has collapsed, leaving gaping holes. The artist César Manrique immediately saw the potential of this place. What’s more, there’s a swimming pool…”. Unfortunately, this attractive sentence from Franz is not to be taken literally. Indeed, there is a splendid swimming pool in the middle of Jameos Del Agua, but tourists can’t swim there. There are much better things to do, as Jameos Del Agua has one of the most amazing crab species in the world: the Munidopsis polymorpha or albino crab – no longer than a centimetre. The white colour of the crab is due to the lack of light in the cave.

Next to it is a museum about the geological past of the Canaries and Lanzarote. This museum is one of the most important centres of scientific research in the world. In his project of harmony between nature and artistic creation, Cesar Enrique endowed Jameos Del Agua with a sublime auditorium. Classical music resounds inside and the incredible sound emanating from this cave cannot leave anyone indifferent.

“It’s time to go home,” says Franz. “Lanzarote still has some wonders, unfortunately we don’t have time to visit everything. Thank you for coming to Lanzarote and I hope to see you next time! “. The group applauds – without much honesty – and returns to the bus, their heads filled with new unforgettable images. As the sun sets on the horizon, we reach the port of Arrecife. The MSC Armonia lights up, giving it an even more imposing stature than during the day. A floating city, definitely. She will sail all night in the Atlantic Ocean to sail along the African coast to Casablanca, our next destination.