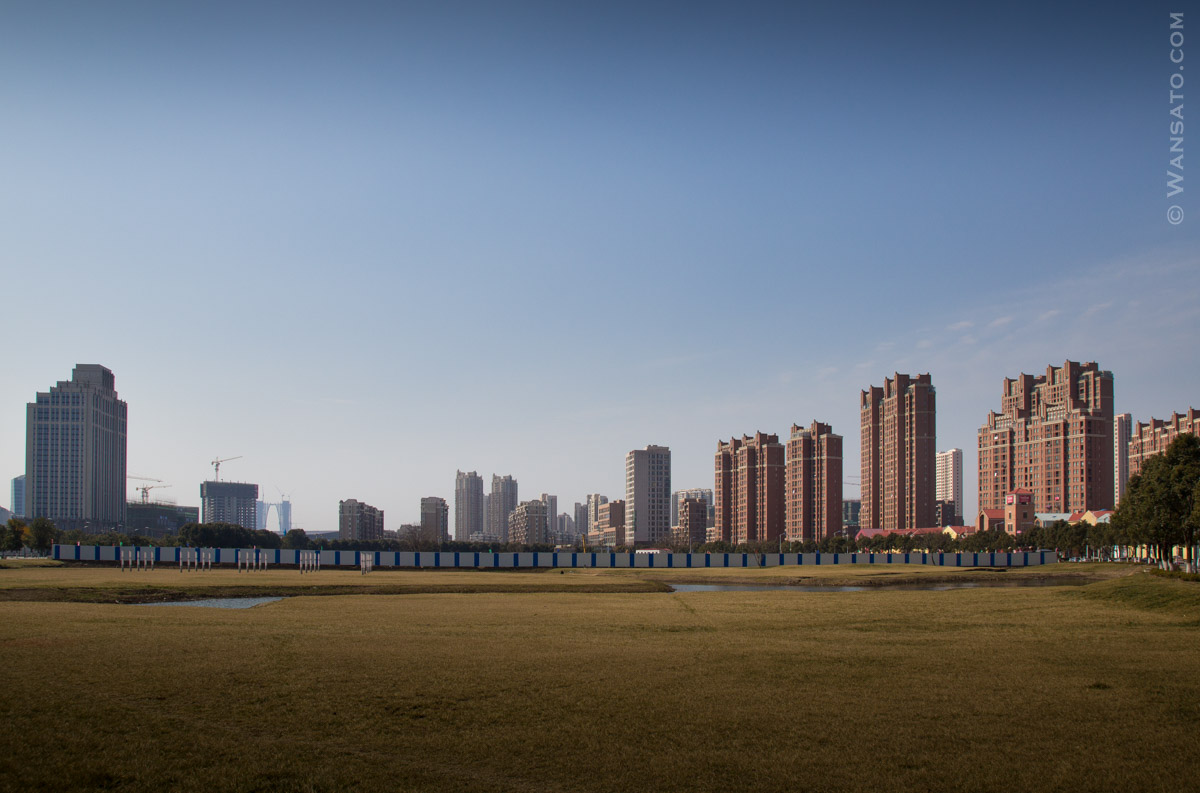 The SIP in Suzhou reflects the exuberant growth of China, a country considered to be one of the oldest civilizations still in existence. Six months to discover the Middle Kingdom, its multi-millennial culture and its people.

n the middle of a crossroads, nobody. In the distance, I see a person who doesn’t seem to know where to go and an old lady who sweeps the huge avenue of the SIP with a broom made of dried grass and a vulgar piece of wood. Usually there are more employees, but the scorching heat of this Saturday afternoon probably got the better of the others.

It is by looking at the hands of these workers that one understands their origins: they are mostly former peasants whose land has been despoiled by the government in order to build buildings, industries, highways and other urban developments for “the good of all”. They have no choice but to look for odd jobs in the nearest town to support themselves, or even to do several jobs at once. Change must be hard, reality even harder.

Are these two people the only sign of life? One would think so, unless one takes into account the few birds singing in the trees in the distance. Even cars rarely move around, because there are simply few people in the neighbourhood and, above all, no activities to do. It is a heavy day and the sun is hidden by a small white veil – of pollution – as usual. It is summer in Suzhou’s SIP.

I decide to cross, even though the light is red. I look to the right. The road seems never to end. In the distance it disappears under the clear veil, the veil that engulfs everything: buildings, cars, roads and even people. On the left the same thing, the huge Jinji Lake disappears completely. After fifteen minutes of walking, a large administrative building covered with party signs takes shape. On the other side of the gigantic avenue, many people are patiently waiting for the bus in a stop that seems too small to contain them all. What are all these people doing on a Saturday afternoon? I approach, and I discover that this building is in fact the equivalent of the French ANPE. They are people who are looking for a job. So not everything is done “under the table” in China. Under its airs of “Venice of the East”, Suzhou is above all an industrial city. Thanks to its status as a Special Economic Zone and its proximity to Shanghai, many foreign and national companies have set up in Suzhou to take advantage of the city’s welcoming environment.

SIP, a Minecraft on a human scale

A perfect grid, straight lines intersecting at 90 degrees, brand new buildings with small Chinese gardens, but most of them unoccupied, trees every ten metres, an endless urban desert. The image seems to be too simplistic, unfortunately it reflects a reality that many people do not want to talk about. SIP stands for “Suzhou Industrial Park” and is the new city near the industrial park. Most buildings must be less than five years old and SIP is no exception in China.

As a result of the Chinese economy, Chinese leaders want to show their superiors the changes they make when they are in power. What are the best ways to show these changes? Simply by building, more and more, higher and higher. Thousands of hectares torn from nature, forests and lakes to build buildings that are or remain mostly empty. China is unfortunately known for its ghost towns, notably LinPing with its majestic replica of the Eiffel Tower. The construction sector represents a large part of the Chinese economy, and millions of people depend on it. It creates jobs and keeps China’s economy growing at a rapid pace – but clearly not fast enough to meet the central government’s target of 7% growth by 2015.

The administrative centre is behind me. After more than twenty minutes of walking under a blazing sun and in streets that are timidly filling up with people, I arrive in front of a gigantic shopping centre called “neighbourhood centres”. In the SIP, mini-markets, restaurants and other small GPS Signal Not Found in Pokémon Go on iPhone businesses at the foot of buildings are very rare. And very often the only way to shop, go to a restaurant, buy clothes or play sports is to go to these centres, which often have open-air playgrounds and gardens next to them. A veritable temple of consumerism and capitalism in the land of “Chinese-style communism”, there are clothes shops, supermarkets, sports halls, bowling alleys, cinemas and above all an incredible number of restaurants. In China, one should not be fooled by appearances, small restaurants are often the most authentic and much better than the big “chic” restaurants, even if the view on the kitchen is not the most attractive.

These centres have above all a social role. They are favourite meeting places for families at the weekend and every evening pensioners gather there to dance together to music ranging from traditional to modern, under the watchful eye of a policeman of course. At weekends, there are often children’s parties organised by the town, and walks in the gardens are for many the only time they have to relax with their families during the week.

Living in the SIP in Suzhou only gives a false view of life in China. Only the most affluent people can afford to live in these brand new buildings and often a car is necessary, even if it is possible to use the bus and metro network since 2011. To get to know the other side of Suzhou, there is nothing better than to visit the old town and especially the famous canals which make Suzhou the “Venice of the East”.