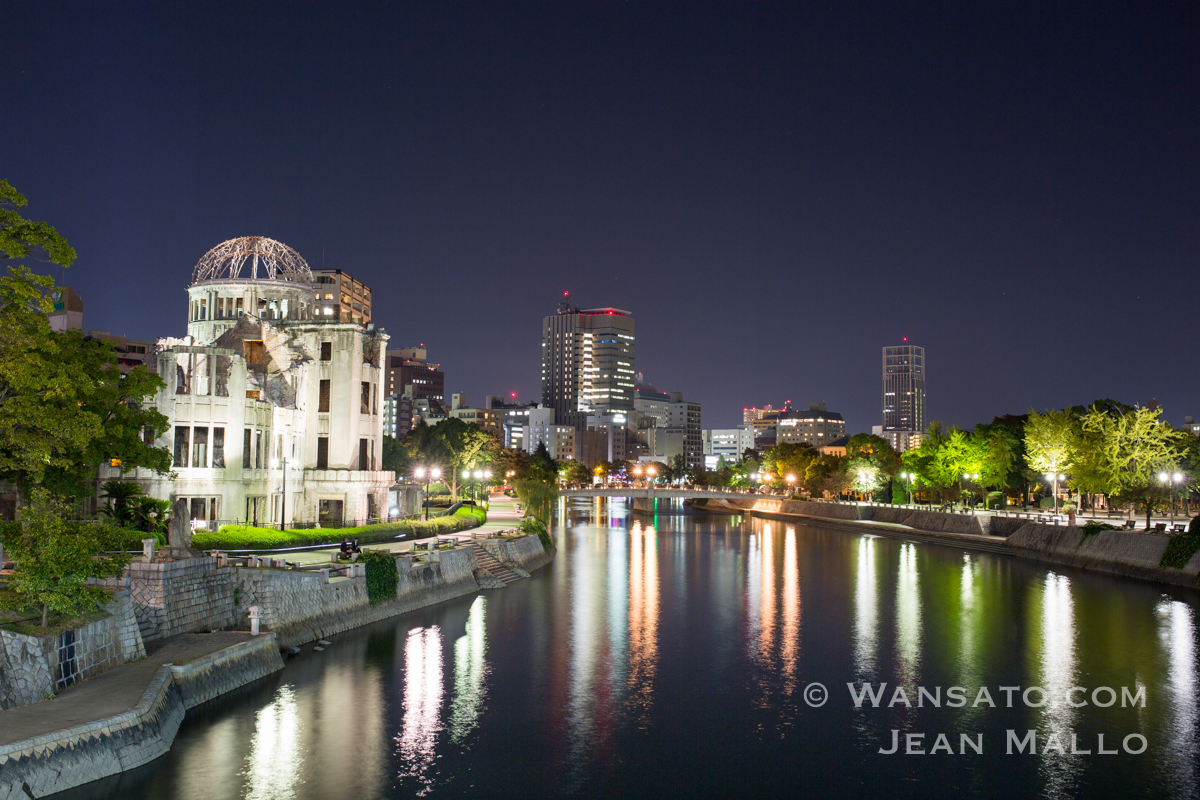 Hiroshima is infamous for being the first city to suffer the effects of nuclear weapons at the end of the Second World War. However, despite some of the scars still present, the city today has become a modern, peaceful and above all a haven for its inhabitants.

cloudless sky. Deep shadows contrasting with the reflections of the sun on the foliage of my garden. This is what I was contemplating that day, early in the morning. I lay on the terrace of the living room in my trousers and vest; I had been up all night in the hospital.
Suddenly there is a flash, then another, and I remember – one always remembers silly things – that I wonder at the time whether it was magnesium lamp lightning or sparks from a trolleybus.
Shadows and reflections, all gone. There is only a cloud of dust in the middle of which I can only see a wooden column that supported a corner of my house. It has taken a strange inclination and the roof of the house itself seems to be hiccupping. Instinctively, I start to run. Or at least I try to. Unnecessarily. The floor is already littered with beams. I can hardly reach the garden. And then, suddenly, I feel extraordinarily weak. I have to stop to regain my strength. That’s when I realise that I’m completely naked! What happened to my trousers and shirt? What happened?

So begins the diary of Dr Michihiko Hachiya, director of a hospital in Hiroshima. August 6, 1945 marks the beginning of the horror for thousands of people, who were previously spared by the American bombing. Having survived the first atomic bomb in history, nicknamed “pikadon” by the survivors, Dr Michihiko Hachiya describes the events as he experienced them, day by day, for about two months in his diary entitled “The Hiroshima Diary”. The wandering of the “hibakusha” – the survivors, the search for their relatives, the need to live after the bombing, the as yet unknown effects of radioactivity on the unfortunate survivors are recounted like an autopsy report, unemotional and very cold.

After the attack, nothing remained of the city of Hiroshima. Only a few buildings, sections of walls and a few trees remained standing, in a world of ruins and fire. The shockwave from Little Boy leveled all the buildings up to two kilometres away and the heat was so intense that thousands of people were burned more than four kilometres away from the impact site. Questions such as “Was it necessary? Whose fault was it? Could it have been avoided? “still fuel many debates today.

Hiroshima, a city full of resources

It is hard to believe that a city, or even a nation, could recover from such a cataclysm, even a second one. Today, Hiroshima has achieved a titanic metamorphosis and has become a modern city with all the comforts and drawbacks that characterise them. Hiroshima has managed to be reborn from its centres. Only one building, a remnant of the war, makes us aware that more than seventy years ago a cataclysm occurred in Hiroshima: the infamous Genbaku Dome, also called the Atomic Bomb Dome. Little Boy – which exploded at an altitude of more than five hundred metres – blew the former exhibition hall almost vertically, which allowed it to remain relatively intact. It is now a World Heritage Site – at the expense of the United States and China… Genbaku Dome is a symbol of horror and human folly, but also of hope that it will never happen again. Let’s hope so.

Our first day in Hiroshima is unplanned and unorganised. We let ourselves wander around according to the wind and our desires. The weather is fine, as it has been since the beginning of this trip to Japan. It’s lucky. Maybe the Shinto gods were warned of our presence. And we thank them. We walk along Hondori Street, the covered street of Hiroshima. As usual, all the Japanese oddities can be found in this busy street, as well as the exuberance of consumerism. It is already time to eat and there is certainly no shortage of restaurants here. As in Tokyo, the choice of a restaurant is made at random, according to the shop window and the dishes that are displayed in the window. It is true that we have a bit of trouble choosing what seems to be a “good” restaurant. And the culinary habits of the Japanese still elude us. But we remain confident, that is part of the adventure.

Once the meal – mostly pasta and soup – is finished, we leave the long Hondori Street and fall directly on the Ota River. It is our only landmark in Hiroshima at the moment, our comfortable flat being just a few meters away from it. In front of us is a huge park with exuberant greenery. We will go there later, knowing that our gaze will be drawn to the Genbaku Dome, which is enthroned in the middle of a small forest. The Genbaku Dome so often seen in news reports, on the internet and in history books does not leave one indifferent when one finds oneself in front of it. It is located only a few hundred meters from the infamous Aioi Bridge, the location of the bomber that dropped Little Boy but did not hit its target.

“Hello. What country are you from? “A person in his sixties, wearing small glasses and carrying a folder in his hand, asks us politely. “Are you French? Wait, I have everything you need. We stay a moment without understanding. This strange character is looking for something in a box with dozens of other folders, which seem to form a rainbow. He pulls out a red one. “Here it is in French. My name is Mito Kosei and I am a survivor of Hiroshima. My mother was pregnant with me at the time of the bomb. Please take the time to read it, we can talk afterwards. We sit quietly on a bench, with Genbaku Dome in the background.

The light breeze blows quietly, the sun-browned leaves begin to fall to the ground. This peaceful atmosphere quickly fades with the first images and texts contained in the red binder. Especially when Mito Kosei’s mother tells the story of the tragic event with pain and suffering. The red binder delivers all the secrets of the bomb, some relevant, others closer to the conspiracy theory. Nevertheless, after reading for a few dozen minutes, a certain uneasiness appears and we prefer to stop.

Mito Kosei joins us and tells us another truth, that of the hibakusha – the survivors of the bomb. “Imagine that you have a document declaring that you are a hibakusha, a survivor of the bomb. The Japanese government gives you all the care you need for free. But, on the other hand, you suffer so much discrimination from society and other Japanese people that it’s like hell. They think that the diseases you have are contagious, don’t want to marry you, etc. Many hibakusha preferred to hide the fact that they were atomic bomb survivors from their entourage, to keep them in the dark… I am a hibakusha and I claim it, that’s why I have been coming every day for the past fifteen years to inform foreigners and Japanese about the truth of the bombing and its consequences”. A sad truth in the end.

Hiroshima is pleasant to walk around and despite the history of the city, we find Hiroshima very welcoming and peaceful, much more so than the megalopolis that is Tokyo. It is a very pleasant city to live in, with lots of green and recreational areas and friendly people. Hiroshima is a human-sized city after all. After greeting Mito Kosei, we head towards the huge park we saw earlier, where the Hiroshima Peace Memorial Museum is located. Very quickly, uneasiness sets in. We listen with irritation, disgust and unease to the terrible stories of the survivors, the ignoble details and the atrocity experienced by these people. At the end, we can’t take it anymore, we have to go outside to get some fresh air, the atmosphere has become so macabre. Our spirits are low. A short visit, not more than an hour, is enough to make us aware of certain realities. The visit to the Hiroshima Peace Memorial Museum is without doubt the most disturbing experience we have had.

The day ends on a lighter note with the gentle melody of the breeze in the trees. The sun is slowly descending over the horizon. We take advantage of the early evening to go shopping. Hiroshima is dressed in its best lights. After a visit to the Food Festival, it’s time to go back home, with our heads full of stories and humility. Discovering the city’s past other than on a screen is an unforgettable experience and so rewarding, even if it is not the most pleasant. The Hiroshima of today seduced us, in its art of living and in its ability to rise from its ashes, without forgetting its tragic past. The sun is setting over Hiroshima. Tomorrow will be a new day. Mito Kosei will wait patiently in front of the Dome, ready to tell his story to whoever will listen.