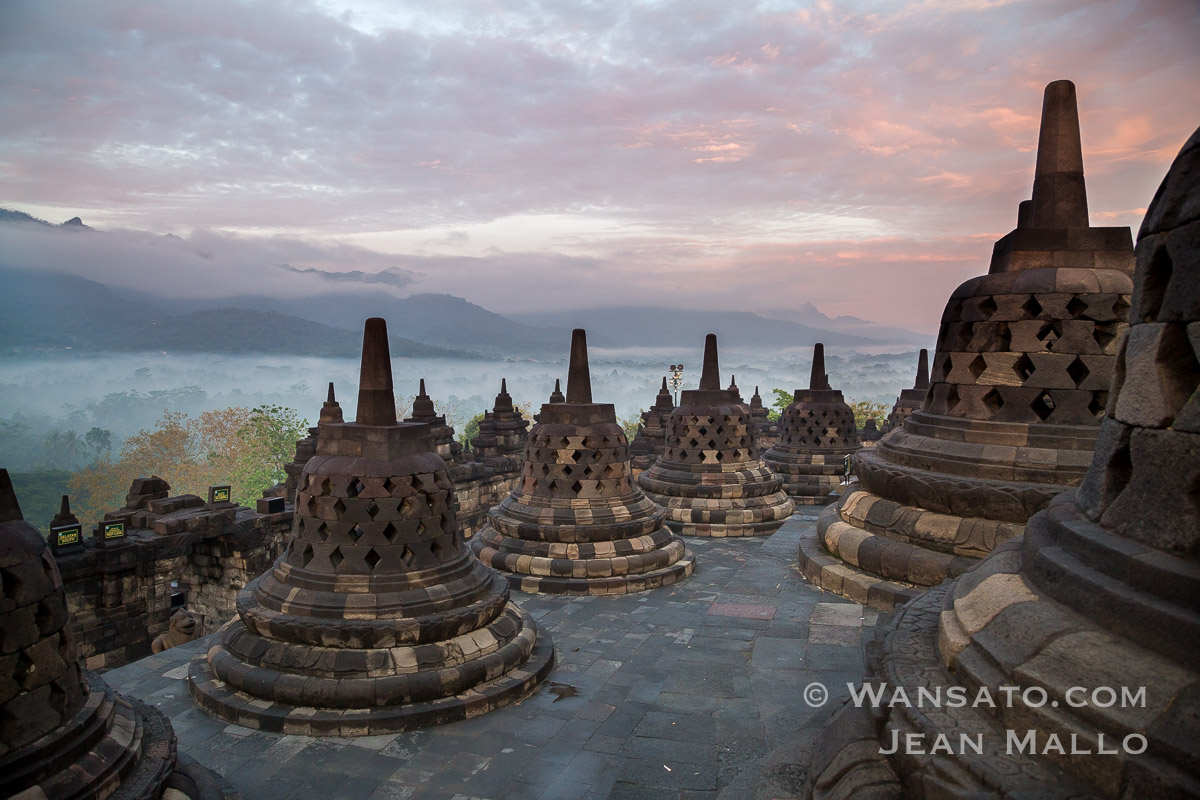 The legendary Buddhist temple of Borobudur and Mount Merapi on the island of Java are among the jewels of Indonesia. Even today, the Borobudur temple still fascinates locals and travellers alike, who do not hesitate to come and see the remains of a religion that has almost disappeared.

light wind is felt. It wanders quietly between the centuries-old stone sculptures, dances between the legs of the visitors before disappearing into the surrounding jungle in a muffled rustle. Only this murmur manages to disturb the tranquillity of the valley. For the moment, the jungle is still sleeping.

After a short walk in total darkness, guided only by the powerful beam of our lamps, the first lights from the temple make their way through the thick wall of vegetation. It doesn’t take much longer for the imposing stone edifice to stand in the middle of an ocean of darkness. A centuries-old Manhattan, illuminated by powerful lights that give it its yellowish colour and make its dimensions even more spectacular. The shadows of a hundred Buddha statues dance on the walls of one of the oldest Buddhist temples in Java. The awakening of the Borobudur temple is just around the corner.

The remnant of an (almost) extinct religion in Java

We are sitting at the top, right next to the main Stupa of the temple, waiting in the dark. To kill time, we play with the flashlight beam, which the guards gave us at the entrance of the park. It is half past four in the morning.

Everyone is getting ready for the show, eating a small snack, enjoying the relative “coolness” of the night. Suddenly, shrill cries emanate from the jungle. No doubt some newly awakened monkeys are stirring in the branches of the nearby trees, says a guard, imitating the monkeys, with a smile on his face. Above our heads, the starry sky shines brightly. An incredible constellation of stars as bright as the lights of a lighter at a concert.

The starry night soon gives way to a uniformly dark blue ocean, which is getting lighter by the minute. Dusk is here, the sunlight is timidly beginning to illuminate the sky behind Mount Merapi. As a Muslim country, we hear the first calls to prayer in the distance, muffled by the distance and the thick jungle. These calls are quickly covered by the cacophonous fields of roosters, closer, which sound the beginning of a merry-go-round that has been going on since the beginning of time. The sunrise over the mythical ruins of Borobudur has just begun.

The clouds are the first to clear, while the sun has not yet appeared. Initially a neutral grey colour, they turn emerald red with hints of orange as the sun rises behind Mount Merapi. The few tourists and locals brave enough to get up before dawn take in this marvellous sight and crackle their cameras to capture this unique moment. The whole sky is immersed in a gigantic blaze. It is as if Mount Merapi has suddenly awakened and is projecting the bowels of the earth into the sky in a spectacle of fire and stone.

We sit there, watching the light of day make its way through and listening to the soft melody of the roosters. At times, the clouds take over and invade the summit of Mount Merapi until it completely disappears under a white veil. As for the jungle, it is immersed in mist that the heat of the sun will take a few hours to dissipate in the early morning.

As the light grows, what in the darkness were piles of stones resembling large bells turn out to be magnificent Stupas, abstract representations of Buddha. On the top floor of the Borobudur temple, two hands are not enough to count them. Next to the Stupas, a few recognisable Buddha statues sit majestically. The origin of the Borobudur temple is not certain, but it was probably built around the 9th century. The same doubt remains as to its abandonment, as it was at the time an important place of pilgrimage for the Buddhist community of Java. During this period, two kingdoms – the Buddhist Sailendra and the Hindu Sanjaya, were at war for control of Java. In the end, it was the Sanjaya who prevailed. Other archaeologists suggest that the temple was not abandoned until later in the 15th century with the arrival of Islam in Java. The temple of Borobudur has been listed as a World Heritage Site since 1991 after a restoration that lasted more than twenty years. Since then, the Buddhist community has gradually returned to the temple for Buddhist events and festivals.

Once the daylight has come, we explore the rest of the Borobudur temple. We are overwhelmed by the thousands of bas-reliefs in the temple. The Borobudur temple is suddenly transformed into a big comic book, the bas-reliefs telling stories and myths – the sutras, of famous Buddhist characters and figures such as Boddhisattva, kinnara, gandharva, apsara etc. Unfortunately, one has to be a connoisseur to understand the Buddhist sutras, as the history of Buddhism and its different currents are so complex for the uninitiated.

In the distance, the sun continues its course through the clouds. The mist around the temple gives it a secret and mysterious side. For a moment there is a feeling of being back in the past, of being able to feel the presence of Buddhist priests chanting the sutras, to hear people praying in a dull hum, to feel the smoke of incense fading into the sky. The calm of the jungle calls for serenity and reverie.

After wandering around the temple for several hours, going back to ancient times and playing archeologist of lost civilizations, we get hungry. A small snack and a Javanese tea in the temple do the trick, all accompanied by the sound of a musician. We can finally rest a little. Then we go to the other attraction of the day, close to Yogyakarta. For a few hours, a small jeep takes us to the slopes of Mount Merapi, to discover villages destroyed by pyroclastic flows and open-air stone mines. The shadow of the volcano is never far away. The inhabitants of the valley are well aware of this, and despite the threat of further eruptions, prefer to use what the volcano is willing to give them, i.e. to cultivate the volcanic soil for local agriculture and to mine the stones in the old flow beds. Do they have any other choice, in a country where the average salary is only two hundred euros a month?

The area around Mount Merapi is one of the most densely populated regions in Indonesia and the world, with more than 1,400 people per square kilometre on the western and southern slopes of the volcano. And despite the creation of a zone where all habitation is forbidden, the population is increasing year after year. In the local culture, the presence of Mount Merapi is considered beneficial and does not represent a danger, on the contrary. It is therefore a problem both for the authorities, who often let the situation deteriorate, and for the volcanologists, who have to inform the population of the risks of living so close to the volcano, as well as having to monitor it constantly. The largest city in the region, Yogyakarta, is only 25 kilometres away, with no natural barrier. In other words, all the ingredients are there for another disaster, more than a hundred and thirty years after Krakatoa.

It is only eleven o’clock in the morning but it feels like a whole day has just passed. With our heads still in the clouds, we rest a little and take advantage of the afternoon to discover the legendary city of Yogyakarta. Tomorrow, others will enjoy the magnificent view from the top of Borobudur temple.