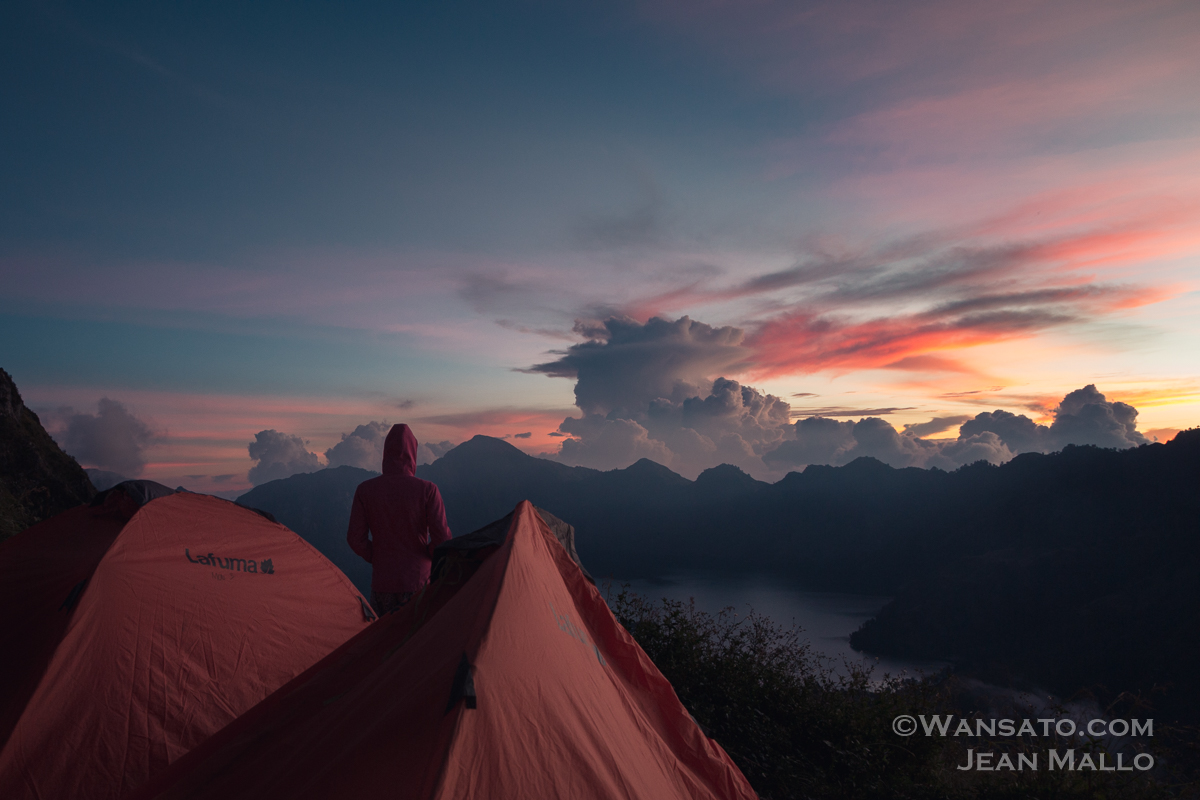 Located on the island of Lombok, Mount Rinjani is the second highest volcano in Indonesia. A wonderful but very difficult three-day trek is required to climb the summit, but offers unique scenery and an unforgettable adventure.

he phone’s alarm clock rings and the screen illuminates the tent with a whitish light. Strident beeps resound strongly. Still half asleep, we start to get up slowly. It is 3:30 am, we are still tired from the day before and our legs are heavy. By leaving the tent, we see nothing. It is dark, the sun is not yet up. Only the majestic celestial vault is illuminated above us, like a tapestry of stars and galaxies painted on the ceiling. Far from any human activity and light pollution, it is only obstructed by the curtains of white clouds that pass over us. We do not distinguish any lights, not a city or a village is visible from up there. Apart from the few other hikers and the porters, we are alone at the top of the Sembalun crater.

Still with our heads in the clouds, we have to prepare ourselves. Have a breakfast, dress warmly, put on the shoes. In a few hours, the first rays of sun will pierce the vault. We mustn’t delay. We can already see in the distance a column of small lights rising in the sky. The first visitors are already climbing the mount Rinjani. Equipped us also of small loupiottes, it is in our turn to launch us in its ascent.

Located east of the famous island of Bali, the tourist island of Lombok is famous for its treks to Indonesia’s second highest volcano, which rises to over 3,700 meters. Mount Rinjani is an active volcano that lies on the Sunda Arc, a subpart of the Pacific Ring of Fire. In its center is a caldera – the result of a collapse of the magma chamber, which filled with water until it formed the Segara Anak lake, the child of the sea because of its bluish color like the ocean.

We stay in a small rustic hotel near the small village of Sembalun. Sembalun and Senaru are two villages located at the foot of Rinjani and are the starting points of the majority of treks to climb the mountain. Depending on the duration and the ascent of the summit, the departure will be either in Sembalun or Senaru. In the early morning, we wake up with the melodies of the minaret, calling for prayer before dawn. The departure of the small group is done early in the morning. We are four persons, our guide Sujar and four porters in clappers. The first kilometers are done without concern in the savanna, at the foot of the mountain. The view on the mount Rinjani is majestic and we see the summit, all up there. It is difficult to imagine that we will be there the next day, when it seems so far away.

After a while, the porters quickly overtake us despite the heavy load they carry on their shoulders. A branch of bamboo and two baskets, a rather rudimentary system in short. Above all, they carry each one more than 40kgs of materials and food. At the first stop, we want to try to carry their loads. We do not hold one minute at the stop so much the pain is important on the shoulder. Our guide Sujar tells us the history of the porters of the island. They start young with less important loads. The first ascents are incredibly difficult and very trying physically for them. Unfortunately, the majority of them do not have the choice to make another profession. It is the porters who are the heroes of this story. And all this in tap dancing!

We arrive at the first wooded hill. The terrain becomes steeper and the slope vertical. The real climb begins here. After 45 minutes of hard climbing, crossing earth stairs, clinging to the roots of the trees, we reach the top. Already tired, sweating, Sujar comes towards us: “courage, there are still 7 hills like this one to cross before arriving at our bivouac”. After already more than 3 hours of walking, these words resound hard in our mind. We understand that this trek will be hard physically, but that it will be especially a challenge for the mental.

Climbing the seven hills will take us all afternoon and we arrive exhausted at the bivouac where we will spend the night. The legs are heavy, and there are two days of walking left, including the summit of Mount Rinjani. From the bivouac, we see the summit adorned with a reddish veil then disappear in the night and the sea of clouds appear all around us. The spectacle is magnificent. But it is necessary to lie down and to take again forces. Tomorrow will be a hard and long day of walking with the ascent of the mount Rinjani.

The snake of lights arrives timidly until the summit. The Indian file becomes less and less as we go up to the top. Many people give up on the way to rest at the bivouac. It is necessary to say, for each step forward, we have the impression to slip three backwards. The ground is unstable, the stones roll under the shoes, the dust flies under the gusts of wind, the legs are heavy. But we have to go on, we concentrate on each step and forget everything else. It will take more than 3 hours to make the 400 meters that separate us from the summit.

Just arrived at the summit, the sun rises and the first rays warm us up. At more than 3700 meters it is cold, even at this latitude. The view around is magnificent. From Mount Rinjani we can see the whole island of Lombok and especially the magnificent caldera and the lake Segara Anak. We rest a moment to breathe and enjoy the view. We are at the top of the mount Rinjani.

The descent is just as terrifying as the ascent. The easiest way is to let go and to run in the slope. Dangerous way, but effective, we will take only ten minutes to return to the bivouac, at the top of the crater Sembalun. After a second breakfast, we go down to the bottom of the caldera by a steep cliff. Sujar warns us: “Be careful, the path is dangerous and with the humidity, it is easy to slip. Several trekkers have already died on this path by falling from the cliff”. Preventive word, but not very reassuring, we are thus careful to go down calmly. There were railings and the path seemed to be concreted in some places, but after several earthquakes and the lack of maintenance, this made the path almost more difficult and especially slippery.

The descent is long, but after a few hours we arrive at the edge of the lake to rest. We do not want to go to see the waterfalls or the hot water baths, preferring to sleep while the porters prepare the meal. The caldera and the lake Segara Anak are magnificent. At times the top of the volcano releases a plume of smoke. We are not safe from an eruption, as in 2018, from a gigantic earthquake*.

We resume the walk peacefully, taking advantage of the flat ground around the lake. Sujar comes to us and says: “Do you see the cliff in front of us?”, pointing his finger to the top of the crater. “We are going to spend the night on the summit. We look at each other pensively. How can we still climb so high today? And yet, after a day of more than 12 hours of walking, we arrive at our second bivouac, on the other side of the volcano at the top of the Senaru crater. It takes a lot of mental strength to make a day of walk such as this one. Especially for people who are not very athletic like us. We can’t take it anymore. Our legs are now stiff, we are exhausted. Fortunately, the last day of the trek will normally be the shortest and the easiest. We enjoy the sunset on the mount Rinjani and the majestic scene offered by the sea of clouds floating all around us.

The last day of walking begins. We leave the Senaru crater and go down the beautiful hills towards the village of Senaru. A few hours of walking, or rather running, because our legs can’t stop us anymore in the descent. Each minute has become a cycle of pain that starts again without end. One step after the other, we have to keep telling ourselves that the trek will soon end. At each break, we wolf down chocolate bars that allow us to have a little extra energy for about ten minutes.

And, finally, at the end of an asphalt path, we see our porters sitting on the back of a van, giggling as we arrive so slowly, as if we were at the end of our existence. They, the ordinary heroes of this more than difficult trek. We will take advantage of the next few days to rest on the Gili Islands, small heavenly islands off Lambok. A well-deserved rest after what will remain the most difficult trek we have ever done. Even with shoes.