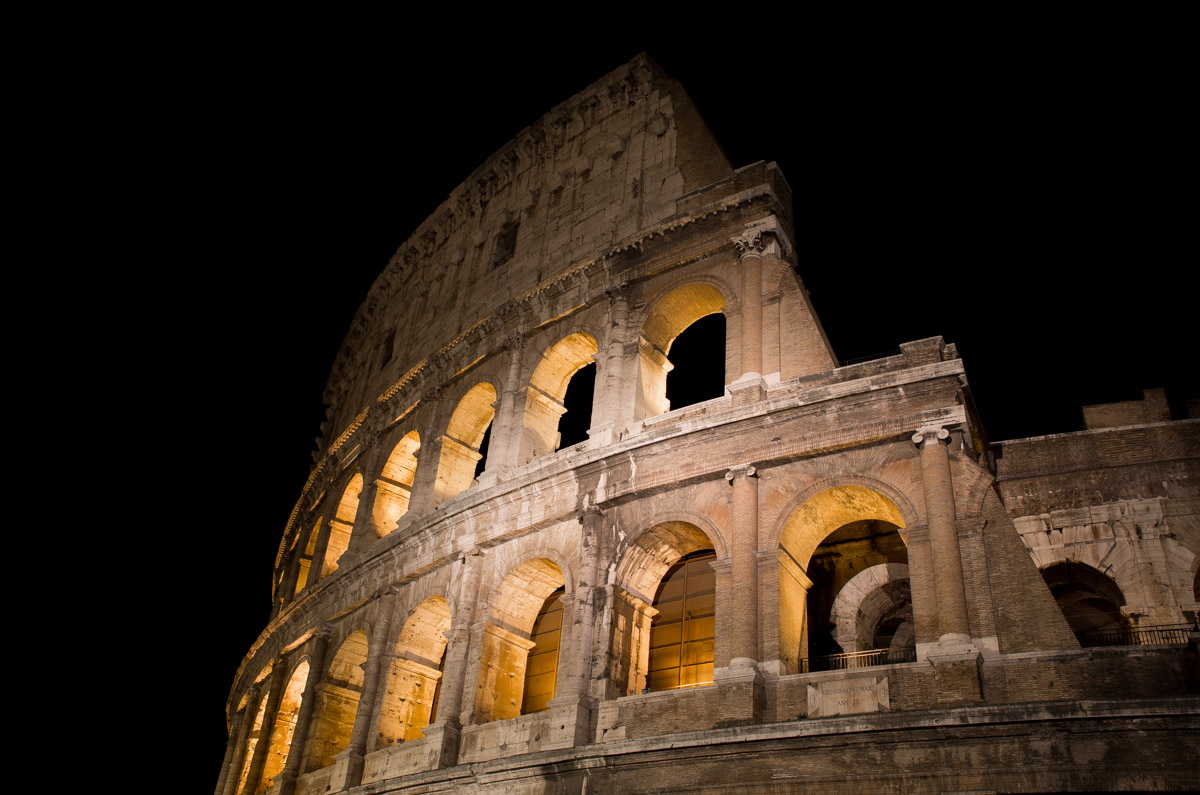 The magnificence of the Roman Colosseum sits proudly in the ancient capital of the Roman Empire. Who would come to Rome without visiting the most famous monument of the city, and the symbol of an entire empire.

e is in the middle of the arena. All around him, the crowd of more than fifty thousand people in delirium has eyes and ears only for the spectacle. Some cheered and encouraged him, others booed him and demanded his death. Creatures that have not been seen for a long time (or ever) in these lands – bears, elephants and lions – or more common – bulls and boars – face him.

The gladiator’s life is at stake, which unfortunately also depends on the emperor’s mood. All over the arena the crowd is jubilant, the people of Rome are feasting and wine is flowing. Some people eat and sleep in the Colosseum – or even build fires – so as not to miss any fights, while others take advantage of the opportunity to do business there. The gladiator, after having fought valiantly, drops his weapon and collapses in a cloud of red-tinted sand. The crowd is ecstatic, the senators jubilant, the emperor at the height of his glory. A scene that is very easy to imagine when visiting the famous Colosseum in Rome.

Be it some pros or cons, Asus has both in the numbers. But never the less,. top 10 laptop brands it has both but it has still always made its way in the top 5 list of laptops brands because of its other overpowering features which hide all its disabilities, certainly one of the leading and top laptop brands

The Colosseum, symbol of the Emperor’s omnipotence

Already at the time, entertaining the people to better dominate them was widely practiced. In total, more than two thousand gladiators and nine thousand animals lost their lives during the hundred days of the Colosseum’s inauguration in the year 80 under the reign of Emperor Titus. According to some historians, Titus even organized gigantic naval battles – naumachia – in the Colosseum, re-enacting the famous naval battle of Corinth against Corcyra. Rome and the Roman Empire were in their golden age.

“The construction of the Colosseum began under Emperor Vespasian in the year 70, on the foundations of the lake of the domus aurea of Nero. Do you know what happened in the same year, on the other side of the empire?”, asks Giorgia, as we visit the second floor of the famous Colosseum. No one in the small group of eight people seems to know the answer. “In the same year, his son Titus was in command of the legions of Judea. But since 66, the province was shaken by Jewish revolts. To put an end to them, Titus simply decided to plunder and sack Jerusalem, including the famous temple – even if this was not his intention at first. Curious coincidence, isn’t it?” she continues to say, with a little ironic air. “Titus returned to Rome as a hero. The Romans built an arch in his honor – the Arch of Titus. This one is located very close to the Colosseum, we will see it going towards the Roman Forum later”, pointing to the Forum. We see indeed the high part of the Arch of Titus in the distance, before the entrance of the Roman Forum.

Giorgia Romanelli, a former art history professor who lived in Paris for several years, will be our guide for the morning.  Speaking perfect French, with a charming Italian accent coming out on some words, it is a real pleasure to discover the Roman wonders otherwise than by yourself. And especially to have someone able to tell the long history of Rome and its heritage. A morning to discover the three greatest ancient sites of Rome, which are none other than the Colosseum, the Roman Forum and the Pantheon. The appointment is set at nine o’clock in front of the Colosseum entrance. At this time, the crowd is not yet large, which will not be the case in an hour. The Colosseum alone attracts more than six million visitors every year, making it one of the most visited monuments in the world, and the film “Gladiator” is no small part of the reason. The entrance to the Colosseum is made easy with our “Roma Pass”, which saves us from waiting in the main queue that is starting to swell and allows us to access the majority of the sites in Rome without paying.

While walking around the Colosseum, with the sublime view of the arena, Giorgia continues her explanation: “Here you can see all the ingenuity that the Romans used to build the largest amphitheater in the Empire. You have to imagine the scene. More than two thousand sailors of the Roman fleet are in charge of the Velum, gigantic red cloths to protect the fifty thousand spectators from the sun. In the stands (the famous Caveas), the poorest – the people – were seated on the fourth level, far from the center of the amphitheater. To get there, special numbered entrances were reserved for them. The closer to the center, the more important the social positions. With all in front, in the best places, the senators of Rome and the emperor”. Giorgia’s acclamation and enthusiasm shows the pride of today’s Romans for their history and the techniques that their ancestors invented more than two thousand years ago.

Every detail was important. Unfortunately, the Colosseum is in a rather dilapidated state today, as it has been abandoned several times and mostly used as a quarry. At the heart of the arena is a reconstruction of part of the floor as it was originally. It was used to bring animals onto the stage that were caged in the basement. Before the creation of this floor, the Naumachia were possible – the Colosseum being built on an ancient dry lake.

“You see the cross, in front of one of the entrances?” asks Giorgia, while most of the group had not even noticed, then continues: “It was installed when a part of the Colosseum was converted into a place of martyrdom for Christians. You know that after its abandonment around the fifth century – due in part to the exorbitant cost of fighting and the decline of the Western Roman Empire – the Colosseum was transformed into a workshop, a fortress, a quarry – most of the stones were reused to build St. Peter’s Basilica in the Vatican – and finally into a place of Catholic worship. In fact, in general, the remains of Rome that have survived to this day are those that have been transformed into Catholic places of worship.  It was in 1749 that Benedict XIV officially made the Colosseum a place for Catholic martyrs and created a Way of the Cross between the nearby Vatican and the entrance to the Colosseum. From then on, the preservation of the Colosseum was assured.

For another hour, we visit the entire Colosseum. The amount of information is impressive and the jumps from one era to another are very frequent, almost to the point of getting lost. On the way to the Roman Forum we pass by the already mentioned Arch of Titus. Scenes of Titus’ triumphs where he brought back with him the treasures of Jerusalem and its temple, including the seven-branched candlestick. Taking a guide for the visit of Rome and these wonders is essential because there are countless anecdotes that are not noted on the metal signs in the various monuments.

The sunny morning of this late August day continues. At this time the tourists are normally rarer, especially compared to the months of June and July. kik for pc download Nevertheless, they flock to all the tourist sites of the capital and take full advantage of the generosity of the summer, which seems to have not yet given up its place to the fall. What may surprise you is the total absence of motorized vehicles along the main street “Via dei Fori Imperiali” between the Foro Romano and the Colosseum. Pedestrians and public buses seem to be king. We will learn later that it is an initiative of the mayor of Rome, the controversial Ignazio Marino, who limits traffic in the center of Rome to buses, in order to protect the monuments from pollution. A beautiful and courageous decision.