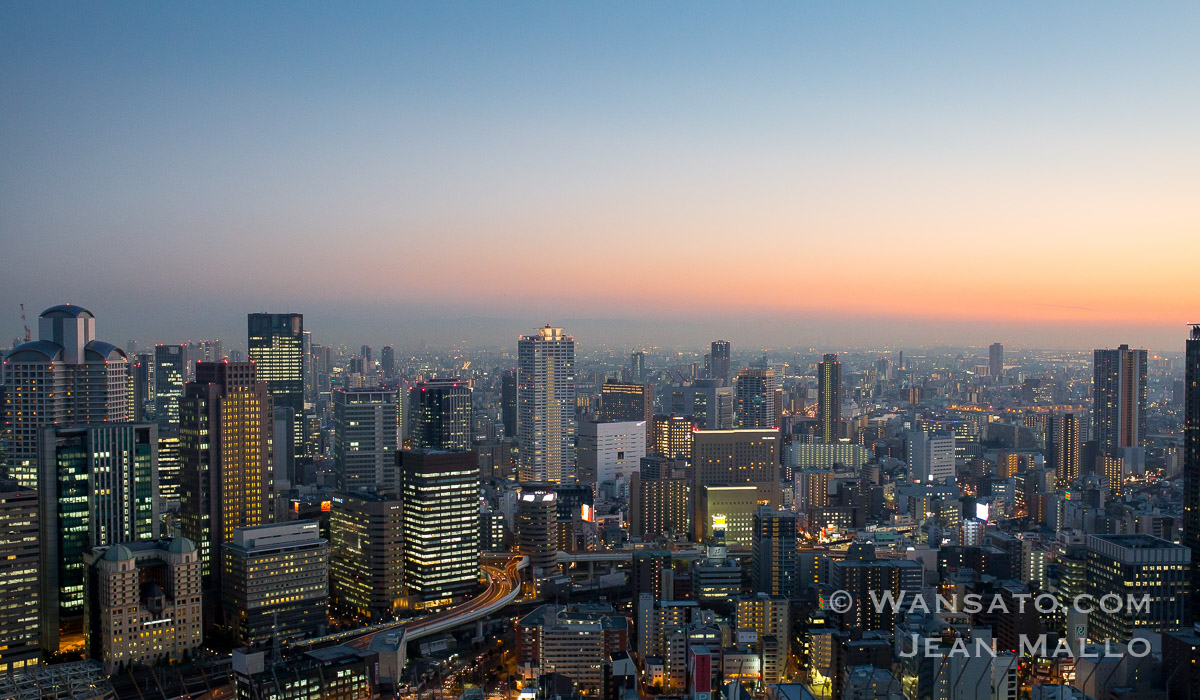 The Umeda Tower in Osaka is a major attraction in Japan’s third largest city. Rising up from the floor of the cows allows you to appreciate this gargantuan city, which stretches to the horizon.

he end of the day approaches. The perfect blue of the sky gradually gives way to a golden light that accentuates the warm colours of autumn even more. Since the beginning of this stay in Japan, the weather has been splendid with mild temperatures. And Osaka is no exception to this rule, for our pleasure. We all agree that autumn seems to be an ideal time to travel in Japan. The weather is, of course, the main attraction of this season. It is neither too cold nor too hot at this time of the year. Autumn is also a good time to attend many festivals in Japan, such as the Fire Festival in Kurama in the Kyoto area. Last but not least, there seem to be fewer tourists than in spring – during the ‘Hanami’ – when the cherry blossoms are in bloom.

Just like the Tokyo and Hiroshima visits before, we don’t have a specific goal and prefer to discover the city as we go. “Planning a little, but not too much” seems to have become the adage of this trip, which we are perfectly happy with. The essential attractions remain on the programme, such as the Umeda Tower in Osaka.

After a day of wandering the streets of Osaka, we headed north. There is the highest point of Osaka, albeit artificial. You have to get up high to see the whole of Japan’s third largest city. And as in Tokyo, you can expect a mountain of skyscrapers drowned in an endless jungle of smaller buildings.

In the new business district of Umeda, near Osaka Central Station, a swarm of well-dressed salarymen (and women), tourists and ordinary people flood the streets around the tower. At the turn of a corner, the famous tower is finally in sight. It is easily recognisable because of its unique architecture and stands out perfectly from the countless shopping centres in the vicinity.

Over the years, the tower has become a major attraction in Osaka, especially since it was named one of the top twenty buildings in the world by Time magazine, including the famous Taj Mahal in India and the Sagrada Familia in Spain. As unusual as this ranking may be, we enjoy discovering the eccentricity of its architecture – without being exceptional -, especially when seen from below. The Umeda Tower is made up of two smaller towers that meet at the top and has a huge circular observatory in the centre. The most unexpected feature is probably the staircase that joins the observatory, suspended in the void. Taking this staircase, we feel like we are in a science fiction movie and riding in an alien ship.

We reach the circular observatory and take part in the mass of selfies that other tourists have initiated before us. A light breeze blows, the sun sets in the distance into the Sea of Japan. In the distance, factory chimneys belch out thick smoke and form shadows that we could do without. The sun is reflected on the smooth surface of the sea. As soon as it disappears, setting the sky on fire, the cloud of photographers fades away.

On the other side of the oval structure, as far as our vision allows, the city of Osaka stretches to the end of the horizon with a pyramid of buildings at its centre. There is so much to see in this spectacle, so many minute details that only we, from the top of the Umeda Tower, can see. We play the game of imagining what the same landscape might have looked like a hundred years ago, or even during a period without humans. Would there be swamps instead of the harbour? Would there be forests instead of the business district? Wouldn’t this building be the ideal location for a meadow? Yet the landscape in front of us is also fascinating and to be honest, also very impressive.

As night falls, the anthill slowly lights up. The motorway through Osaka becomes a long filament of red and white lights stretching along the curves of the city. We stay for a short time contemplating the immensity, until hunger strikes. It’s time to get back down to earth and sample some of Osaka’s renowned cuisine. And what better place to do this than in the Dōtonbori district, now a major tourist centre and made world famous by the Glico Man.