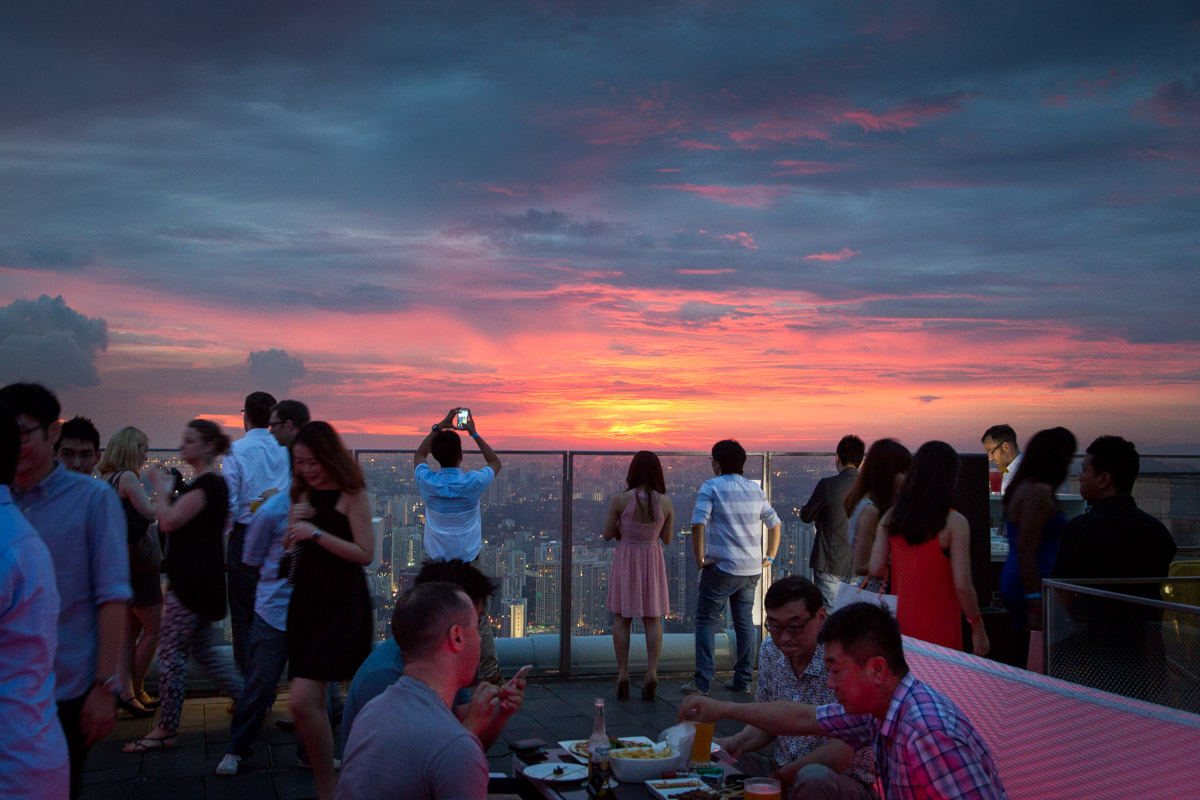 The Marina Bay Sands, its ship-like hotel and its infinity pool are known worldwide. The most famous hotel in Singapore is also an important cultural center where a multitude of events are organized every year.

n the way back from the Garden By The Bay is the landmark of Singapore: the Marina Bay Sands, the famous boat balanced on three buildings. The swimming pool with its splendid view on Singapore is unfortunately reserved for the visitors of the hotel. In the afternoon, we decide to go to the shopping center at the foot of the building before going to the city center by subway.

Hypnotized by the boats sailing in a reproduction of the famous canals of Venice – Asians love to reproduce European cities -, a Buddhist nun stares at us strangely and approaches us: “Come with me! “, she tells us in almost inaudible English and points to the camera. “Come, follow me, photo! “, without even bothering to introduce herself. A little embarrassed and especially not knowing what to do, we follow her with all the questions of the world in mind. In an ultra-crowded shopping mall, in Singapore, in the Marina Bay Sands, a nun alone can’t do much for us. Let’s hope so! She often turns around with a big smile to make sure we follow her, so dense is the crowd. Arrived in front of a gigantic hall, several members of the security stop us by asking us what we make there. We then realize that the monk is trying to get us into what seems to be a Buddhist assembly or ceremony. She negotiates with an organizer in Chinese, who finally lets us in on one condition: that we are accompanied by a security person.

The Marina Bay Sands, the symbol of Singapore

The interior of the big hall is decorated with incredible Tibetan tapestries and small statues, and we realize very quickly that we are the only foreigners present. With the rudiments of Chinese, the nun explains to us that a very famous Tibetan personality is going to give a speech after the break, a speech about world peace in particular. “I come from Taiwan, from the temple of Fo-Guan-Shan. I am here to help during this event”, the nun tells us, without understanding her name. “Please stay for the speech. You can have tea and cookies. I have to go and help the others now.  As embarrassed as we were after the nun left, the security finally decided to leave us alone. Many people around look at us, us French people lost in this Buddhist ceremony, especially when we take cookies and tea.

This meeting is a ceremony of Drigar Thubten Dargye Ling, a Buddhist community founded by the eminent H.E. Garchen Rinpoche in Singapore in 2007. The primary objective is the study and practice of the Dharma for those who wish to do so. Garchen Rinpoche was born in 1936 in Tibet. He is currently the head of a famous monastery after having spent more than twenty years in Chinese prisons and now participates in several Buddhist ceremonies and meetings around the world.

After fifteen minutes, we take our seats and the speech of the eminent Garchen Rinpoche begins. He speaks Tibetan while most of the people present speak only Chinese. Fortunately two translators are there to translate the wise words of the monk in Chinese for one, in English for the other. The topics discussed are quite varied and refer to the Dharma: spiritualism, peace, meditation, relationships with others etc. A school of life. Next to us, people spin small Tibetan prayer wheels or kneel down to pray. As we go along, religion invades the place. A fantastic and peaceful experience.

After more than two hours, as if suspended in another time, listening to the words of the monk which resound like a mediation, we discreetly slip away. On our way out of the hall, we meet the nun again who invites us to come back the next day to share a dinner with the community. Unfortunately for us, the next day will already be the last of our stay in Singapore.

The 1-Altitude Bar, the highest in the world

To admire one of the most breathtaking views of Singapore, you have to go to the 1-Altitude bar, said to be the highest bar in the world. This bar is located in the OUB tower, 1 Raffles Place. It is also important to know that it is a “select” bar where the dress code is quite strict: tuxedos for the gentlemen and dresses for the ladies. Surely pushed by the good star of the afternoon and our participation to the Buddhist ceremony, we succeeded in a real tour de force by presenting ourselves in flip-flops, flowered shorts and T-shirt. To be able to go up, it is enough to order a cocktail of approximately twenty-five euros which it is necessary to recover with the bar, which is of course very top of the tower OUB.

Once we arrived at more than 282 meters of altitude, we understand why the price of the cocktail is so high: the view on the city is simply magnificent and is undoubtedly one of the most prized. The sunset, with these clouds is simply splendid and the shimmering colors of the sun on the city make it sublime. All the people present remain admiring in front of this spectacle. Only a few minutes after the sunset, the rain starts to fall. The staff ordered us to leave the terrace of the 1-Altitude, and directed us to the nightclub located two floors below. After looking at the menu and its bottle of vodka at only two hundred dollars, we understand that it’s time to go back home to enjoy the jacuzzi one last time before our departure the next day.

On the way to Keppel Bay, we stop in the Chinatown of Singapore. The prices are of course much higher than in Kuala Lumpur. We stop there to eat good fried chicken dishes with a creamy sauce and a duck dish. A treat for the taste buds. But given the time, it is wiser to return, especially since the rain does not seem to stop. If you have to be wet already, you might as well be wet in the jacuzzi!

Singapore leaves in the end a rather mixed impression, a bit like Kuala Lumpur. After a trip to Malayan paradise islands and a trekking in a multi-centennial jungle, coming back to civilization is a strange feeling. Maybe also because it’s the end of this trip to the other side of the planet. After all, a city is a city. And unlike other Asian cities like Hong Kong, Shanghai, Tokyo or Taipei, Singapore is quite sober and above all without superfluous. But it offers interesting places to visit (we did not go to any museum or inland for example), if you take the time and the means. Singapore is a rich city, for the rich and especially for shopping, but it will certainly not leave you indifferent.

The Lufthansa flight LH 0779 to Frankfurt is announced. We don’t make the same mistake as on the outbound flight. While waiting at the boarding gate, we realize that two weeks have already passed. A wonderful trip to discover incredible cultures and people, from the middle of the jungle to eighteen meters deep, passing by the highest bar in the world and a Hindu temple on a gigantic mountain. It’s time to go back to our daily worries and to the office to start working again until and for our next trip. Maybe the trip will become our daily life. Our next trip? Thailand? Japan? Peru? South Africa? Maybe H.E Garchen Rinpoche knows.