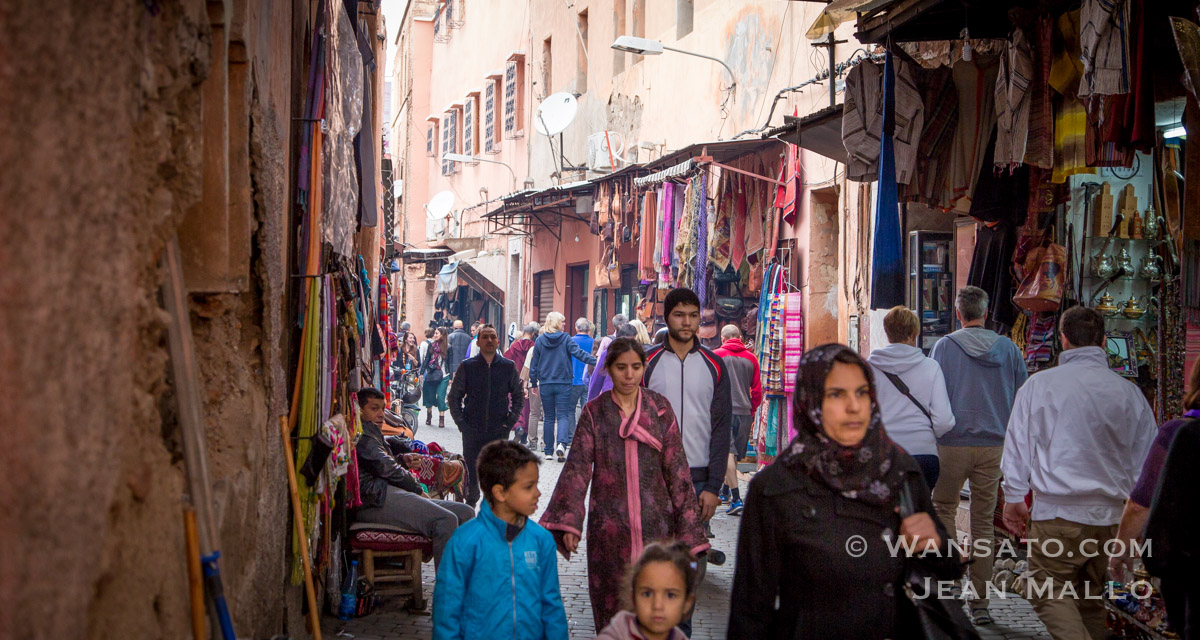 From the Agafay desert rises the famous ochre city of Marrakech. An imperial city and former capital, Marrakech is full of unusual places to visit, not forgetting the famous Jemaa el-Fna square, located in the medina.

The bus is speeding along the motorway. We have been travelling for almost an hour through an infinity of greenery. To the right and to the left, plains as far as the eye can see. From time to time, a small village with its beautiful white or orange mosque creates a break in this uniform space of colours and shapes. The shadows of the clouds float over the hills of grass and rock. Laughter rings out. It’s the three Norwegian women in their fifties at the back of the bus again. As laughter is contagious, the whole bus starts to laugh too. What is certain is that they are enjoying the trip and they are letting it be known. A sign on the edge of the motorway indicates that there are still a hundred kilometres to go before we reach the legendary city of Marrakech. In the distance, despite the clouds of sand, the snowy peaks of the Atlas Mountains loom large, revealing the beauty of Morocco.

The Koutoubia mosque, starting point for the visit of Marrakech

The bus finally parks near the esplanade of the Koutoubia mosque, at the foot of the minaret and very close to the medina of Marrakech. Everyone gets off quietly. Our guide arrives, or rather our guides. Three or five, we don’t know who is in the group of guides and who are the curious passers-by. No time for introductions in any case, we are not here to get to know each other. After a brief introduction to the Koutoubia Mosque, built around the thirteenth century by the Almohad dynasty, we have fifteen minutes to visit the esplanade of the mosque. First contact with Marrakech, nicknamed the red city in reference to the colour of the majority of the houses. The square at the bottom of the Koutoubia minaret is relatively empty. Only a few fruit and vegetable sellers are around, quietly waiting for a potential customer, next to people sleeping on public benches. The weather is relatively warm and the turquoise blue sky would make people jealous in France for this month of December. Probably because of the number of tourists in Marrakech, shopkeepers and passers-by don’t want to have their picture taken. Unfortunately, being in a group of forty people coming from a giant liner and staying only a few hours in the city does not favour a friendly contact with Moroccans. It is and will be more of a business relationship, of “I have to sell you everything, cheaply, cheaply”, to the point of caricature.

The esplanade of the mosque is quite small. The time to go around the square, one of the guides asks us to follow him: “This way, we have to go on”. The visits follow one another at a brisk pace, as the MSC liner Armonia and its two thousand other passengers are not waiting. After crossing part of the medina of Marrakech, with its countless small and beautiful alleys, its extreme traffic and its old red brick houses, the second visit of the day can begin. This is the Saadian tombs.

Last vestiges of the Saadian dynasty

Listed as a UNESCO heritage site, the Saadian tombs were rediscovered in 1917 after more than two hundred years of neglect. “It was at the beginning of the 18th century that the Alawite sultan Moulay Ismaïl decided to destroy all the constructions and references to the Saadian dynasty. But he did not dare to destroy the graves. He therefore ordered to seal this whole area by building a huge wall at the entrance”, says one of the guides, perhaps their leader? “The Saadian dynasty extended from northern Morocco to Timbuktu and Gao at their peak. The Saadians ruled from 1549 to 1660 and Marrakech was, along with Fez, one of the capitals of their dynasty. Looking at the tombs, we understand why Moulay Ismaïl did not dare to destroy them. The decorations of certain rooms, doors and walls are sublime. Even with the help of the best technologies we have today, they would be very difficult to reproduce. The ingenuity of the craftsmen of yesteryear to create these masterpieces was boundless. An architectural richness which, unfortunately, most of it disappeared in Marrakech because of the Sultan Moulay Ismaïl.

After wandering around for several dozen minutes, contemplating the different rooms, one of the guides takes us to the entrance of the tomb. He frantically waves a blue sign with the letters MSC. We have to hurry, as usual. Visits to “sponsored” shops are also the norm on these tours. Right next to the tombs is a shop selling all the “local” products of Morocco: spices, argan oil, almonds etc. Chance is the key. Above all, the technique is well tried and tested. The group leaves the shop with countless bags filled with souvenirs, teapots, small pharmaceutical bottles and powders of different colours. The merchants can rub their hands, and the guides can certainly do the same.

It is already noon and the minarets are calling for the adh-dhouhr prayer. The Moroccan dancer, with traditional music playing in the background, carries a tray of candles on her head and shows all her agility and flexibility by doing the belly dance. All she needs is a smile to make you believe in the dream. The decor of the restaurant is sublime, the subdued light accentuating the shadows and shapes of the decorations. We stopped at one of the traditional restaurants in the medina of Marrakech. The sound of splashing water in the fountain makes the atmosphere calm and peaceful. At the next table, the three Norwegian girls are performing when the dancer passes out in one of the restaurant’s dark corridors. The atmosphere in the group is relaxed, people are getting to know each other, talking about their cruise on the MSC ship, telling anecdotes, even if the British humour of the three people in front of us is not easy to understand. Moroccan cuisine is known worldwide for its couscous and tagine. We will not be disappointed with the meal.

“It was built over a period from 1859 to 1900, before being used by the French governor of the Moroccan protectorate. A mixture of pride and revulsion towards the former French invader can be felt in the guide’s voice. He also alludes to all the stories that have taken place in the palace, which almost rival reality TV shows. Without any furniture, the Bahia Palace seems a bit empty. Only the frescoes and the majestic decorations give life to the palace. The small inner courtyard is attractive with its vegetation and small fountain from which water flows from the Atlas peaks. The clucking of the three Norwegian women and the jokes of the British break the silence of the palace. A short visit that leaves us a little hungry.

The last visit of the day is the very famous Jemaa El Fna square, in the south-west of the medina of Marrakech. It is without a doubt the most touristic place in Marrakech and at the same time the one where tourists are the most “in demand”. After about ten minutes, we can already hear voices rising above the hubbub of the square. One of the Englishmen refuses to give money for having photographed a monkey from a distance. The tension rises, the guides intervene. A ticket is discreetly passed from one hand to the other. Everyone leaves happy. No right to photograph the snakes and monkeys without having paid a few dinars beforehand. A few metres further on, the monkey breeders put the monkeys directly on the tourists. Of course, if you don’t refuse immediately, they ask for a few dinars for playing with the monkeys. Jemaa El Fna square is lined with bars, cafes, restaurants – where most of the photos on the internet are taken – and above all shops selling all the Moroccan specialities. Of course, bartering is possible and knowing the price of products is imperative.

The Jemaa El Fna square is part of the magic of Marrakech. With the sun setting over the Koutoubia Mosque in the distance, the first metal carts carrying food stalls arrive on the square. It is at sunset that the Jemaa El Fna square comes alive. The stalls offer all the culinary flavours of Morocco, the smoke of the wood fires rising gently into the Marrakech sky. Unfortunately, the bus is already waiting for us near the esplanade of the Koutoubia mosque.

On the way from the Jemaa El Fna square, all the guides ask us for a small tip. It is time to return to Cassablanca, where the MSC liner Armonia is located. A last goodbye to our guides and the bus leaves. We find the giggles and laughter of the Norwegian women at the back of the bus. Marrakech and its magic disappear in the distance into the desert, letting the night fall on the Atlas and on Morocco.