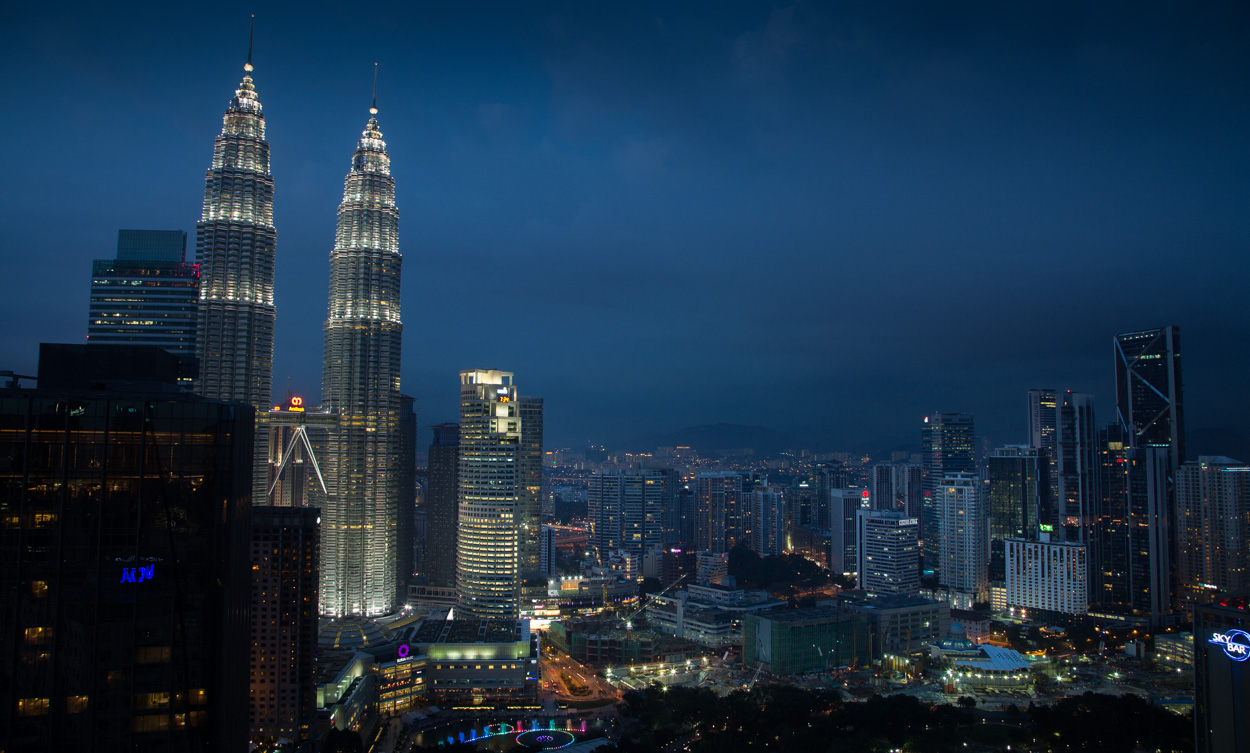 Indians and Chinese are the two largest minorities in Malaysia. In general, the two communities live in separate neighborhoods in Kuala Lumpur. But the Hindu temple of Sri Mahamariamman is an exception, being located in the heart of the Chinese district.

he clouds are coming in full force. The humidity is overwhelming and the sun starts to disappear little by little. It is only a round and transparent ball. The sky becomes dangerous, but how can we leave the refreshing pool when the temperature is over thirty degrees?

Also, this has to be one of the best pools in Kuala Lumpur for its breathtaking view: located at more than forty floors, it offers a direct view of the Petronas Towers, which are among the tallest towers in the world and are a real economic showcase for Malaysia, of the public park that encircles the towers and of the nearby Kuala Lumpur business center. Unfortunately, the storm is approaching. It is time to go out, and to come back when it will be over.

The evening before, in Kota Besut. A must for the Perhentian Islands, which are a real paradise for any diving and sandy beach lover, Kota Besut has a square in the center of the city from where buses leave for the capital. At the end of the day and with the setting sun, this square turns into a local night market. This must be the best place to discover the local and authentic Malaysian cuisine after a visit to the Perhentian Islands.  Nevertheless, the buses always manage to find a place in the middle of the steaming caravans and the crowds that crowd around. The bus for the return to Kuala Lumpur is rather old. Every two hours during the eight hours of the journey, the light turns on to let some passengers out, and to let others in instead. Also, with the air-conditioning pushed to the maximum, a sweater or a blanket is required, at the risk of catching cold.

Arrival at 7 am in Kuala Lumpur, with the rings of the journey but just as the city starts to wake up. Some people are leaving for work, others are just coming back. The stores will open in an hour, and the yellow and orange tinted brightness of the sun is slowly increasing. The day rises on Kuala Lumpur.

Malaysia being an exceptional multicultural country and a crossroads for people, the discovery of the Chinatown, or Chinese quarter, is an obligatory step for any stay in Kuala Lumpur. The Chinese culture and influence over the centuries are very important for many Asian countries, the Chinese way of life, the temples or the writing are examples among others. And Malaysia has known during its history several important waves of Chinese and Indian immigration in particular. The Chinese population, during the British occupation from 1786 to 1957, almost surpassed that of Malay origin. Even today, a large number of people of Chinese origin live in Malaysia, and represent more than twenty-five percent of the population. The Chinatowns are like human anthills, with a concentration of Chinese culture that the first Chinese migrants brought with them from China, and that their descendants have managed to preserve, with the addition of certain traditions from the local culture.

Surrounded by Jin Petaling Street and Jin Sultan Street, Jalan Petaling Street is the heart of Chinatown. This street is completely covered, which is perfect during the heavy rainfall that Malaysia experiences during some monsoon months. The entrance to Chinatowns and its main street Jalan Petaling is marked by a portico with typical Chinese architecture. Beyond this gate, the eye remains hooked on the hundreds of lanterns that overhang the street. Below is the bustle of the market: street food, rice and vegetable stalls, clothes and CDs directly imported from China. With the two traditional Chinese lions and the two dragons running along the columns, the Kuan Ti temple is easily recognizable compared to the remains of the Chinatown buildings. This one is located in the street Jalan Tun HS Lee. It is dedicated to Guandi, the Taoist god of war who, in mainland China is the protector of mafias and mobsters.

At the corner of Jalan Bandar street, just in the extension of Chinatown stands Sri Mahamariamman, probably the oldest Hindu temple in Kuala Lumpur. In the space of five minutes it is possible to leave the Chinese culture to discover the Indian one: another beautiful proof of the integration of different peoples in Malaysia.  Built at the end of the nineteenth century for the Pillai family, the Sri Mahamariamman temple is another must for any trip to Kuala Lumpur. The entrance gate is impressively detailed, with over two hundred miniature sculptures of impressive finish. Inside the temple, the prayer hall is decorated with frescoes depicting the Ramayana, one of the founding writings of Hinduism. Many people come here to pray and it seems that this is one of the starting points of an offering cart during the Thaipusam festival, going to the Batu caves, north of Kuala Lumpur. The entrance to the temple is not free, just a few RMs to store shoes because like all Indian temples, it is forbidden to walk around in shoes.

Chinatown, with its covered main street and its temple dedicated to the god of war, as well as the Hindu temple are wonderful places to discover all the cultures that make up Malaysia. It doesn’t take more than a few hours, perfect timing to wait for the keys of the apartment, and then to be able to swim in one of the most beautiful pools of Kuala Lumpur.