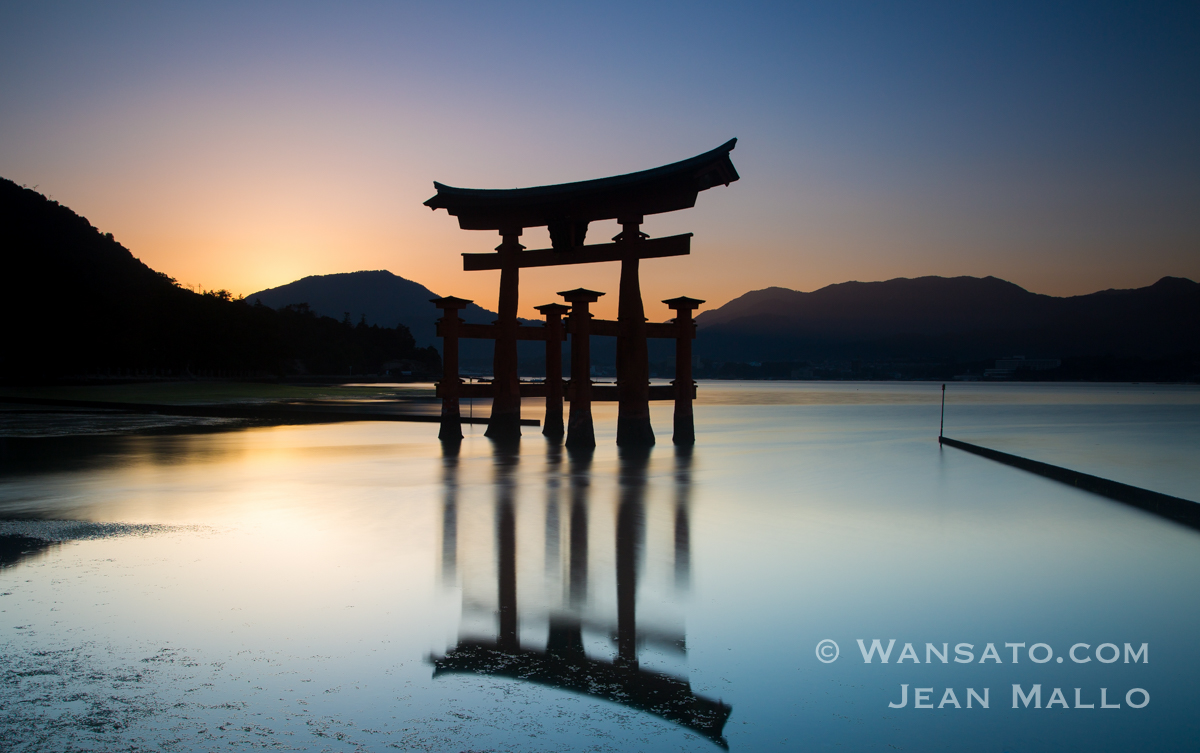 If there is one place that describes the spirit of Japan, its spirituality, its essence, it is undoubtedly the Torii of Ituskushima. A famous red wooden gateway over the sea, it is certainly no coincidence that the Torii is considered one of the three most beautiful sights in Japan.

The boat glides quietly over the almost perfect surface. The clear blue sky merges at times with the Seto Sea. There are no clouds on the horizon, the sun is at its zenith. At the back of the boat, a little girl exclaims “Look at Daddy! “pointing with her outstretched arm to something on the horizon. The closer we get to Itsukushima Island*, the more the cameras crackle. All attention is now focused on him. At first a point of infinity, it gradually reveals itself until it becomes the main actor of the scene. Its singular contours become clearer and its glowing colour contrasts with that of the sea. Finally, the famous Torii of Miyajima faces us, surrounded by the mirror-like waters of the Seto Sea, as if the gods had amused themselves by placing it in the middle of the sea, as they had no other more appropriate place. But, in their divine wisdom, they were able to protect it from ancient and recent disasters. Or at least tried to…

The sacred island of Itsukushima

After only forty-five minutes by boat from the centre of Hiroshima, the boat lands on the sacred Shinto island of Itsukushima, in the small town of Miyajimacho. The first contact with the islanders is quite unusual and surprising. It doesn’t take long to understand the meaning of the many warning signs all over the island. In barely ten minutes of wandering and after a moment of inattention, a deer discreetly sneaks up behind us. With a sure and automatic move, she grabs the only paper map of the island and swallows it whole. Hinds are considered to carry the messages of the gods in the Shinto religion, so they have every freedom on Itsukushima Island, even the freedom to annoy the hordes of visitors who arrive daily on the sacred island.

Miyajimacho, located in the northwest of the island, is the only place to live on Itsukushima Island. This small town of about two thousand inhabitants – much more if you take into account the deer – has the particularity of having neither a maternity hospital nor a cemetery. It is indeed forbidden to be born or die in a sacred place such as Itsukushima, the island where gods and men live together. From the port station, it takes about fifteen minutes to reach Itsukushima Shrine via Omotesando, which is the name of the main street in Miyajimacho. There is no shortage of souvenir shops, teahouses and restaurants. In fact, some of these shops have automated the production of manju cakes with gargantuan machines. The infernal rhythm of the automatons displayed in the windows does not fail to attract and hypnotise the tourists. The experience is completed by the delicate scent of sweets from the shop. Everything is designed to attract the tourist to the shop. Even the gods cannot resist. Further down the street, tourists can try the other specialty of the Hiroshima region: oysters freshly grilled over a small wood fire, as at the Hiroshima Food Festival.

Itsukushima Shrine, one of the three most famous views in Japan

After passing by the giant wooden spoons, we walk peacefully towards the Itsukushima shrine. This shrine is dedicated to the three daughters of Susano-o no Mikoto, the god of the sea and storms. It has been built and rebuilt many times over the centuries. The present shrine dates from the sixteenth century, but has architectural features from the twelfth century. In the past, it allowed pilgrims and visitors to land in Miyajima without setting foot on it, as the island was sacred. The entrance gate to Itsukushima Shrine is the famous gate or Torii, known as one of the three most beautiful sights in Japan.

Just like at the Meiji-Jingu shrine in Tokyo, we have the chance to attend a wedding in the pure Japanese tradition. Unfortunately, the customs and habits still escape us, but certainly not the beauty of the newlyweds. It is curious that part of the ceremony is public. In Europe, it would be strange to enter a church and attend the wedding of strangers. Nevertheless, this is a delight for all visitors and adds to the inescapable charm of the place.

Itsukushima Island has many temples and pagodas to explore. The best known are Daiganji Temple, the five-storey pagoda – Goju-no-to, and Senjokaku Temple, all of which are located next to Itsukushima Shrine. The Daisho-in temple is quieter and has far fewer tourists, but is no less beautiful. The deeper we go into the mountains and get closer to Mount Misen, the more the charm of Itsukushima becomes apparent. A few hours’ walk to discover the countless jewels of the sacred island of the gods and to get lost in the small streets of the city, far from the bustle of Omotesando Street.

The Torii, the gateway to the divine

The sun begins to sink slowly to the horizon. It casts its golden rays and bathes the entire island of Itsukushima in a divine twilight. It is time to come down from Mount Misen and enjoy the magnificent sunset in front of the Torii. On the way, among all the languages that form a melodious concert we manage to hear one that is familiar to us. It is a curious coincidence that people from Alsace who live less than twenty kilometres from us are also visiting the Torii. It’s almost like finding your neighbours on the other side of the world.

The elegance of the Torii stands before us. In the blink of an eye, a white bird appears in the shadow of the giant. This one is not there by chance. When the tide is out, many small animals become trapped in the seaweed or simply take advantage of the low tide to emerge from their hiding place. The meal is irresistible for the bird, the photo is also for us. After this break, the sun disappears behind a nearby mountain, leaving the Torii majestically as the only actor on the stage. We contemplate one of the three most beautiful views in Japan. A new change of scenery, the blue hour appears and with it a magnificent mixture of warm and cold colours like the gradation of a painting. The twilight in Miyajima has an exotic flavour. The whole image of the Far East is reflected here, in the calm waters of the Seto Sea. The cameras are crackling again, people are jumping into the water, another unforgettable day is about to end in front of a majestic landscape. Within minutes, the scene changes and a new act begins, with artificial lights illuminating the Torii and the surrounding mountains as shadows. We are at the denouement of the play, the theatre will soon draw its curtains.

It is time for the last spectators to leave, the last boat to Hiroshima is already waiting. On the way, we greet the deer one last time for their warm welcome. They too deserve a good night’s sleep. The Omotesando street, so busy in the afternoon, is now empty. The port is also about to close, leaving the last passengers to board the boat connecting the sacred island to the rest of Japan. On the boat, we see the Torii gradually disappear into the darkness. The curtains are drawn and, on the other side, the city of Hiroshima glitters with a thousand lights in the distance…

*Itsukushima is the official name for Miyajima