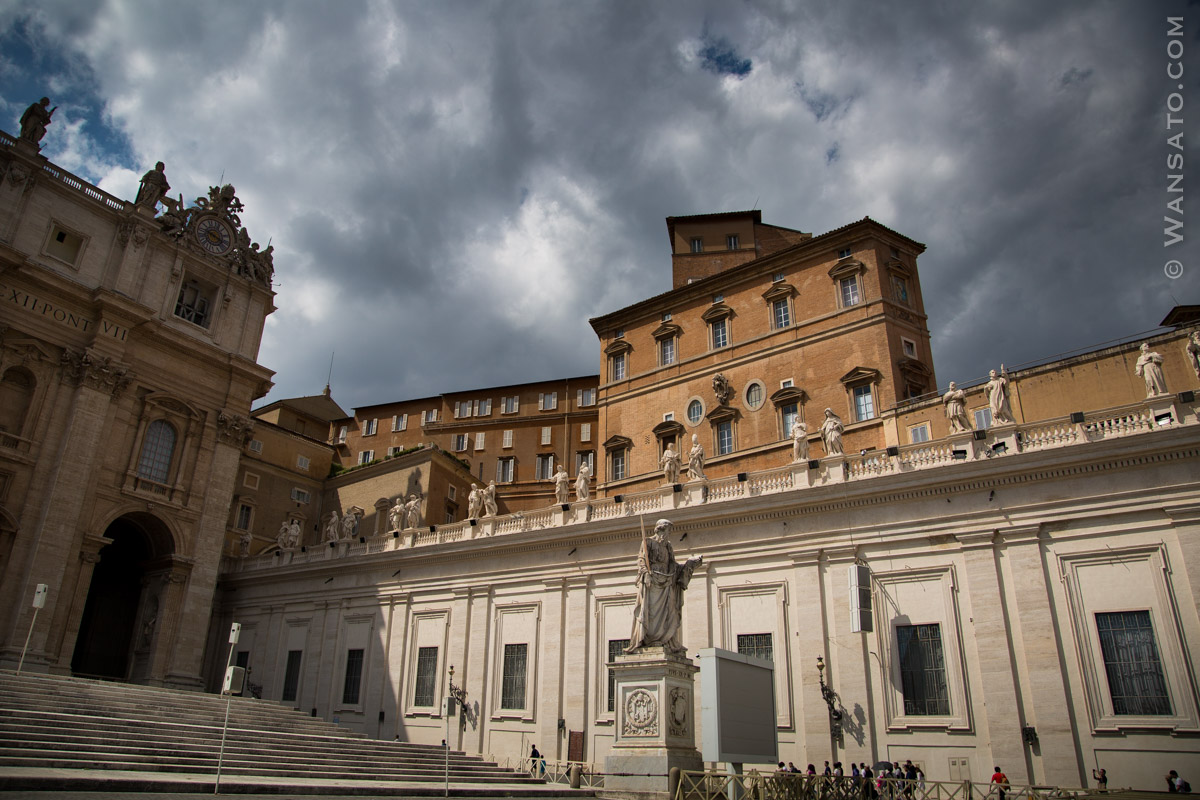 The Vatican and its Basilica of St. Peter represent Christianity and the Catholic Church in the world. Every year, thousands of pilgrims from all over the world flock to this unique holy place.

simple fence today represents the border between these two states which, over the centuries, have been at war many times. Anyone can go from one side to the other as they please. There are no searches and few guards watching the comings and goings of tourists. And if there are, they sit quietly in a chair watching the endless flow of people and waiting for their day to end. Entering St. Peter’s Square from the Vatican is a breeze.

Only the horde of street vendors and Indian guides remain wisely on the Italian side, as if deterred by some invisible force. In the square, the queue is already getting longer in the early morning and this dynamic will not stop until the end of the day. Thousands of people are ready to wait in the sun for hours in order to visit the famous Basilica of St. Peter. Only the shadow of the pillars are for a moment an oasis of coolness, but it never lasts very long. In this queue, everyone tries to keep busy as best they can. Some are playing with the children, others are reading the travel guides, and the last ones are taking pictures and playing on their smartphones.

Unfortunately for a few people, waiting in line is only the beginning of the ordeal. After several hours of waiting, they are refused entry because their clothes are not “appropriate”. No bare shoulders and a cloth up to the knees are the rules. Cruel disappointment, because it is not so easy to get into St Peter’s Basilica in the Vatican, unlike the square in front of it.

St Peter’s Square and Basilica, symbols of the Vatican

St. Peter’s Square and its basilica are a symbol. They represent the Vatican, the apostle St Peter, the papacy and above all Christianity as a whole. Built by Bernini in the time of Pope Alexander VII between 1656 and 1667, St. Peter’s Square is surprisingly gigantic with its elliptical colonnades all around. Bernini also knew how to play with the senses by creating a giant and perfect optical illusion. If you go to certain places marked on the floor, a single row of columns appears each time.

St. Peter himself would find it hard to imagine the beauty of the place. Thousands of worshippers can gather here during the most important Christian religious festivals. Some tourists even hope to catch a glimpse of the Pope and receive his blessing from the Apostolic Palace, the Pope’s official residence directly on St Peter’s Square.

At the centre of St Peter’s Square is the Vatican Obelisk, once the landmark of the southern part of the famous Circus Vaticanus. This obelisk weighing over three tons was moved to its present location in 1586 by Domenico Fontana for the construction of the new basilica, which is a prodigious Download Root explorer program for Android phones and tablets for free. Root explorer for Android will help you to solve the tasks in hand. On either side of the obelisk are two magnificent fountains, for the benefit of the crowd on this hot day in late August.

Once inside St. Peter’s Basilica, the crowds are always there. It is best to follow the direction of the march. “You are here in the house of God and under his benevolence,” begins the voice in the headset rented for seven euros at the entrance to St. Peter’s Basilica. An ingenious system, it is possible to scan a map of St. Peter’s Basilica to get the information you need about the countless artistic masterpieces in St. Peter’s. “Come and join us, you lost sheep…”, says the little voice in the headphones. The first few sentences continue in the same vein and are almost reminiscent of a catechism lesson.

Inside St Peter’s Basilica there are countless statues in memory of famous Christian figures. There are so many of them that Wikipedia will surely delight the most curious. Over the centuries, each pope has added his own personal touch, commissioning works from the most famous artists of their time. The beauty of the place is astonishing. Everything is luxurious. Those who think the church is pious and poor are mistaken. This wealth has been at the heart of many disputes between various factions in the church over the past centuries, and many people have undoubtedly lost their lives. At the centre of the basilica is the tomb of St Peter, discovered in the 1950s, and the ruins of one of the oldest churches dating from the time of Constantine, the first Roman emperor to convert to Catholicism. This is the heart of St. Peter’s Basilica.

Between the very interesting information on the works and the history of the basilica, some speeches seem to exonerate the Catholic Church of all the atrocities it has committed over the centuries or are simply not mentioned. Instead, the contribution of the church to the world, whether it be the people who became famous, morality, the right path etc., is highlighted. This gives a mixed impression as to the veracity of the discourse in general, which is a pity.

After an hour’s journey into another era and religious indoctrination, we leave the interior of the basilica. To reach the roofs of St. Peter’s, you have to take a staircase with more than two hundred and fifty steps. For the less athletic, it is possible to get there by lift for two euros more, but the same number of steps must be climbed before being able to admire the city from the top of the dome. bluestacks offline install The interior of the dome is completely protected by a fence, and allows us to see the height of the building and all the details of the dome’s paintings, including the impressive number of Vatican Seals Once the tour of the dome is finished, the hardest part has just begun. It goes under the dome and is not easy to access because the stairs leading to the top are extremely narrow. It is better not to be claustrophobic. But the view of the Vatican and Rome is worth it. From the top of the dome, the largest ancient buildings in Rome are visible and the city reveals all its charm. The mountains in the background embellish an already magnificent picture.

The Vatican’s Swiss Guard, the last in the world

After several hours spent visiting St. Peter’s Basilica, there is one last thing not to be missed: seeing the smallest army in the world. Indeed, the Swiss Guard of the Vatican counts only one hundred and ten soldiers. Recognisable by their yellow, blue and red uniforms, the Vatican Guards guard the entrance to the Holy See next to St Peter’s Basilica. To go further, you need an invitation from a person resident in the Vatican, a visa of sorts. “I come from the canton of Lucerne, and I’ve been here for a year. The Swiss German accent of this guard leaves no room for doubt. “Only Swiss nationals can join the Vatican Guard, it’s a tradition that goes back more than 500 years,” he continues to explain. Indeed, only the cantons of Zurich, Lucerne, Fribourg, Uri and Unterwald can train and send these young Catholics to the Vatican. The language of the Swiss Guard is therefore naturally Swiss German.  But not just anyone can join the Swiss Guards. “I like being here and … Zurückgehen! Zurück! (Get back! Get back!)”, the guard shouts as he walks up to tourists who have crossed a white line to take photographs. Respect for the rules is paramount, the tone sometimes dry and brutal. The Swiss side, no doubt. This will put an end to the dialogue. We stay a few more minutes to see the changing of the guard, which in the end is not exceptional.

It is the end of a busy morning in the heart of Christianity. To be able to get so close to the secrets of the Vatican is an exciting thing, so many crazy stories circulate in people’s imaginations. Above all, visiting one of the smallest countries in the world is fascinating in itself, especially when it is the seat of one of the most important religions. But St. Peter’s Square and its basilica are only half the trip, the other half being the sublime Vatican Museum.