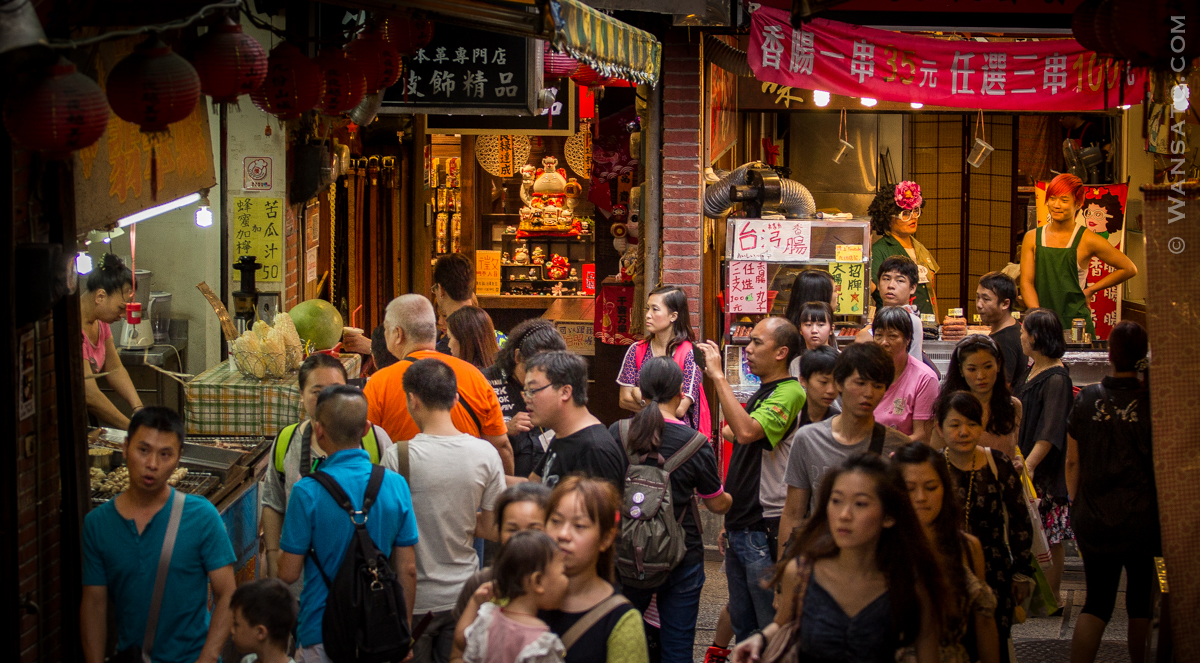 Jiufen was once an important mining centre, especially for gold. Nowadays, this small village on a mountainside is one of the major tourist destinations in Taiwan.

he bus is speeding along. It shakes and makes a low sound when the driver shifts gears. The gearbox is probably not new anymore. The road is steep at times and the curves narrow, but the driver does not hesitate to overtake scooters on a road where two cars are hardly facing each other. The engine roars when it comes to climbing a hill. But this doesn’t seem to worry the passengers, who are used to using the buses snaking through the mountains north of Taipei.

All around the bus lies the forest. It’s only been a few minutes since the bus left the gigantic city of Taipei and yet already an infinity of greenery is revealed before us, perfectly matching the shapes of the mountains, and only interspersed with a few huts here and there on the side of the road. And even in this setting, which seems to be cut off from the world, the bus stops. In the middle of a climb, with the road as the only sign of human presence in this natural world, a bus stop. An elderly person – quietly waiting for the bus – gets on. It is almost reminiscent of certain scenes in the film Totoro by the Japanese animation director Miyazaki. The clouds in the sky are becoming more and more threatening and rain is imminent. It takes almost an hour for bus no. 1062 from Taipei to reach Jiufen, a small village lost in the mountains.

The bus finally reaches its destination, a dilapidated car park at the bottom of Jiufen. With the light rain starting to fall, Jiufen looks more like an abandoned city. Architecture is unfortunately not Taiwan’s strong point and Jiufen is no exception to the rule. Everything is concrete and sheet metal, like the rest of the island. A disappointment that will be quickly swept away once you reach the top of the stairs that lead to the entrance of the old town. A two-storey platform offers a sublime view of the whole bay and the China Sea, which disappears into the clouds in the distance. Tourists are becoming more numerous and, as everywhere in Taiwan, a 7/11 and a Family Mart remind us that even in the middle of the mountains, modern life has arrived here. In the middle of the crowd appears a small street measuring just one meter wide from which all the tourists seem to come out. The magic of Jiufen begins as soon as you step into it.

Jiufen (九份) means “the nine portions” in French, referring to the nine families that once inhabited this village. For decades these families were cut off from the rest of the island and lived in virtual autarky. Two years before the Japanese occupied and colonised Taiwan in 1895, Jiufen suddenly became more interesting. And for good reason, a vein of gold was discovered in the mountain! Up to seven kilograms of gold were produced daily thanks to Japanese modernisation and technology. During the Second World War, some British and Australian prisoners of war captured in Singapore were sent to the Jiufen mine to collect gold. Many of them did not return. After the war, the amount of gold mined declined dramatically until the mine closed in 1971. Like other towns around the world, Jiufen lost its attractiveness and was once again forgotten.

The rebirth thanks to the cinema

It was not until 1989, following the release of the film “A City of Sadness” by Taiwanese director Hou Hsiao-hsien, that Jiufen became a major tourist attraction for the Taiwanese. The incident (or rather the massacre) of 28 February 1947 was a taboo subject in Taiwanese society at the time and this was the first time a director tackled the subject on screen, just two years after the end of martial law. It was a huge success and the picturesque streets of Jiufen had a lot to do with it. In 2001, Jiufen became an international success, again with another film. Jiufen was the inspiration for the famous “Chihiro’s Journey” by Japanese director Miyazaki. Since then, the small mountain town has become the number one tourist destination for the Japanese after Taipei – Taiwan being very popular with Japanese tourists.

The gourmet side of Jiufen

Shops run the length of the street and offer tourists local and handmade products – mostly tea, biscuits, candied duck feet, fish ball soups, but also souvenirs and postcards. The flavours of delicious Taiwanese food fill the street, lanterns line the small alley and the friendliness of the shopkeepers makes Jiufen a unique town in Taiwan. At times, the atmosphere is reminiscent of Japan, as there are so many tourists from the Japanese archipelago. Especially since most of the older people in Taiwan know how to speak Japanese due to Japanese colonisation. Above the shops there are many hotels offering small rooms at affordable prices for overnight stays in Jiufen. It is also possible to stay with local people, who provide a room at the back of the house. But you will either need to know a Taiwanese person or go through a Chinese language website.

The restaurants and tea houses each have their own speciality. Stopping and enjoying the view from the terrace while drinking a Taiwanese tea is the best experience in Jiufen, especially after criss-crossing the small town during the day. The Grand Tea House lends itself beautifully to this relaxing activity. This tea house is over a hundred years old and sits in the middle of Jiufen and its beauty is impossible to miss. Apart from the main street, it is possible to get lost in the other streets of Jiufen which form a real labyrinth. Some are quieter than others, but you always find a temple when you thought the path would lead nowhere. Trekking up the mountain provides a great view of Jiufen and is relatively easy to get to.

Many tourists head back to Taipei or continue along the coast after a few hours in Jiufen. But it is at sunset that the magic of Jiufen is revealed. The lanterns light up, the streets are finally empty, the calm returns and Jiufen prepares for the night. It is at this moment that the imagination takes over and we understand the origin of Miyazaki’s inspiration for his film.