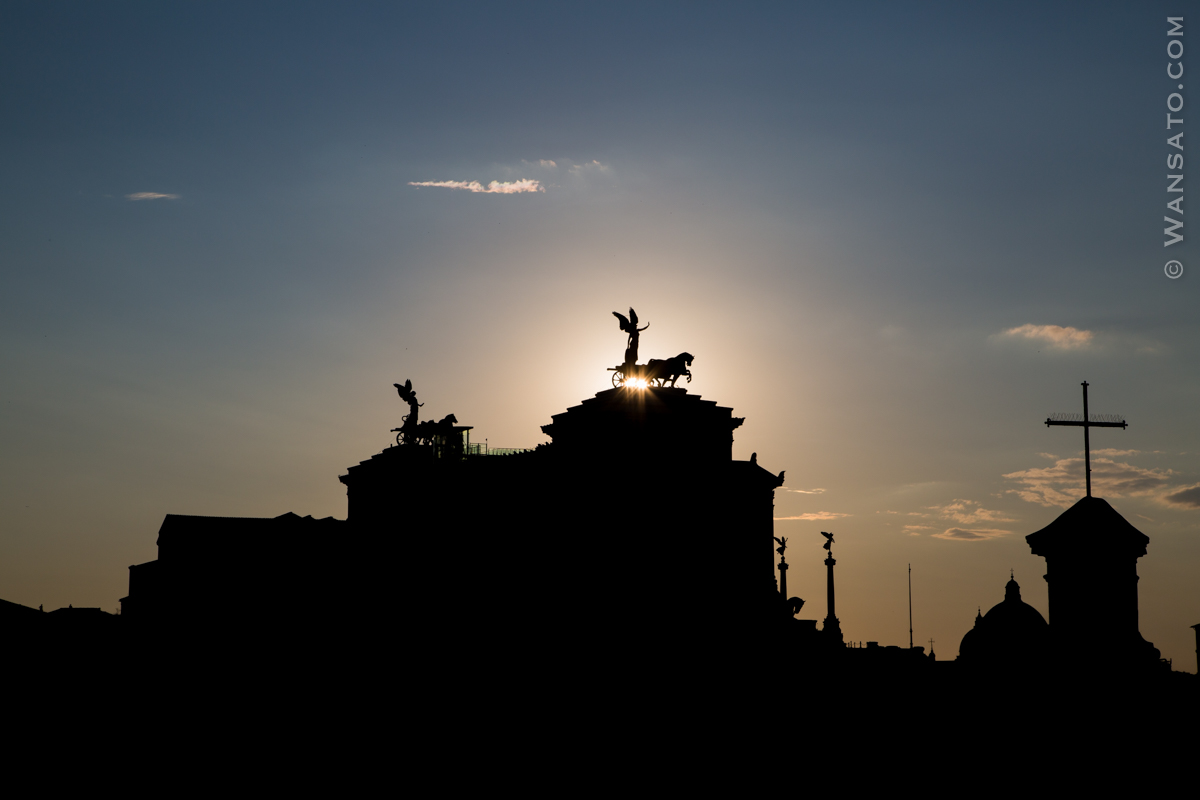 Rome is without a doubt one of the most famous capitals of antiquity. The capital of today has become a unique city thanks to its very long history, having fallen into disuse and being forgotten for centuries.

he last days of August do not seem to be synonymous with the end of summer. It is at sunset that Rome reveals all its secrets and the fiery light accentuates the details that make this city a unique architectural jewel. Then comes the moment when the shadows of the countless domes, churches and basilicas meet in the cloudless sky and start dancing together to create a unique shadow play. The Rome of the 21st century rubs shoulders with the Rome of antiquity with a gentle harmony. To the delight of tourists.

It is 8pm. The sun is slowly descending on the horizon. It is Saturday evening and the streets are beginning to fill with young revellers. From the terrace of the Hotel Forum, we can see what seems to be one of the best views of the Roman capital, quite simply. Right in front of us is the “Monument to Victor-Emmanuel II”, symbol of the Italian Republic and its unification in 1861 by Victor-Emmanuel II. Some Romans like Giorgia Romanelli, our guide for the morning visit to the Colosseum and the Roman Forum, call it the “typewriter”. Perhaps because it was used for several years by Mussolini for his propaganda. A fear of their own history? A “fashion” effect? No matter, today this gigantic building located between the Colosseum and the Vatican is one of the most visited places in Rome – of course after the Colosseum and the Vatican. It is even possible to visit a church inside, proof of the faith of the Romans – even today. The sun doesn’t seem to be interested in these stories and continues its never-ending race. A last drink on the terrace and the tiredness of the day’s marathon fades away a little.

We walk along the “Via dei Fori Imperiali” as the light begins to fade. On our right we see the ruins of the famous Forum of Trajan. This was built by Emperor Trajan after the annexation of Dacia – a region north of the Danube and rich in gold and silver mines – in 108, after several years of war against the Dacians. The ruins of Trajan’s Forum are beautifully illuminated and bear witness to the ingenuity of the Romans in building gigantic monuments.

Just behind the Forum, the Market of Trajan is illuminated, probably one of the best preserved monuments together with the Pantheon of Rome. In addition to its commercial function, the Market of Trajan also housed in the 2nd century two libraries and administrative offices. Right next to it is the Trajanic Column, a real architectural gem created by Apollodorus of Damascus in 113. The bas-reliefs telling the story of Trajan’s victory over the Dacians are wrapped around the forty-metre high column. This is the heart of ancient Rome.

Rome and its old town

Taking a staircase on the right side of the Piazza Foro Traino we leave the glories and adventures of Trajan and enter the old town of Rome. Splendid little streets full of small shops and the most exquisite flavours from the kitchens of Italian restaurants, it is a pleasure to stroll through the back streets of tourist Rome. Some of these streets are empty of tourists and have kept all the charm of the old days, others look like the tourist factory of Saint Germain des Prés in Paris.

We go north to the famous Trevi Fountain, which is unfortunately under construction for a long summer. The choice and the smells finally push us after an hour of wandering to a small restaurant far from the bustle of the busy streets. The majority of the customers are Italian and it is with great happiness that the bruschettas – toasted bread with olive oil – brighten up this sweet end of day to discover the beauty of Rome.