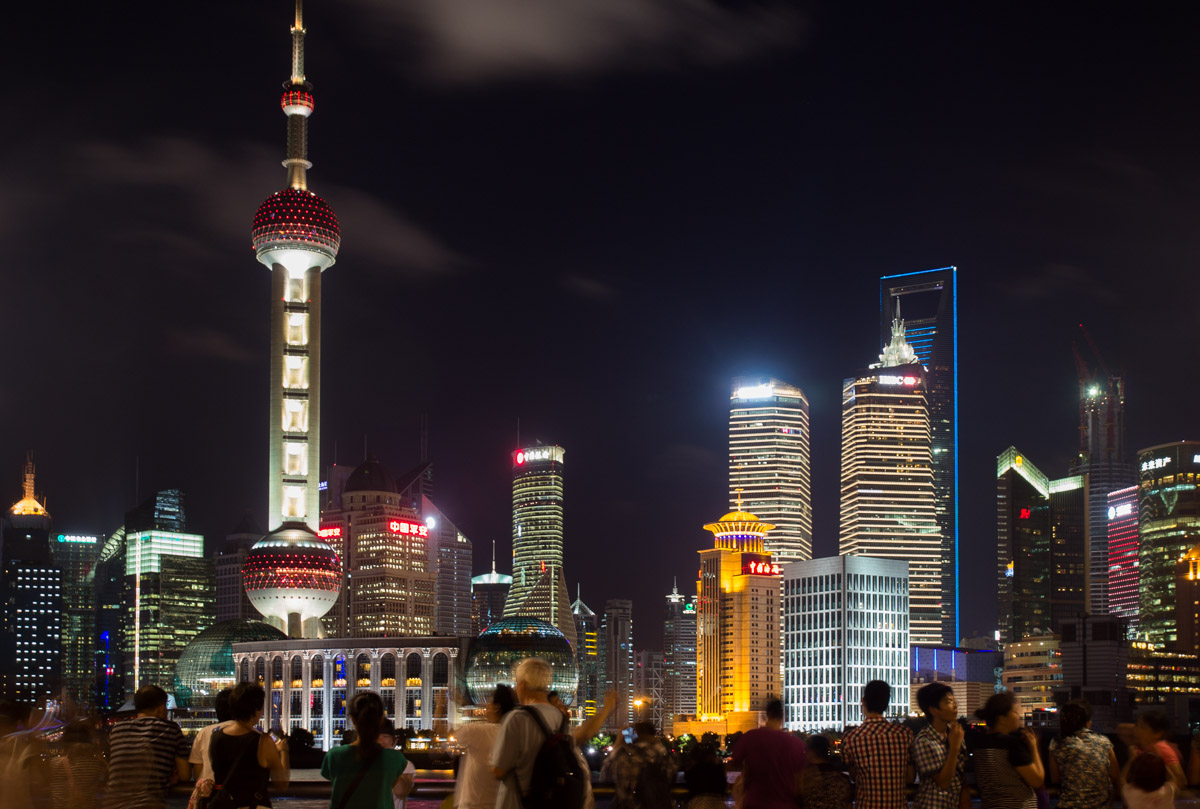 The Bund is the old district of the foreign concessions of Shanghai created in the last century by Europeans and Americans. Opposite, the contrast is striking with the district of Pudong, the economic window of China.

light breeze cools the heavy atmosphere at the end of the day. The sun is about to set, after a day of hard work. With its departure, the show will soon begin. The crowd has gathered on the quayside. Many foreigners, but the vast majority are Chinese. The flashes of the tourists’ small cameras start to crackle, to their great pleasure. Smiles, amused gestures and group photographs. It’s as if the world has come together for a moment to forget all its problems and have fun together.

The boats are decked out in lights and floating quietly on the Hangpu River 黄浦江, literally “Yellow River”. The skyscrapers put on their bright costumes and seem to defy the sky. The clouds reflect the neon light and give the scene a gigantic feel. Man, in front of these glass and concrete giants, seems very small. Shanghai is preparing for another night.

In the intro, we talked about how great of an application iOSEmus is and why is it so popular but that is why you are not on this blog post, Right?. iOSEmus for iOS without jailbreak Dont worry as we are done with the talking, and it is about time we discuss how to download iOSEmus without Jailbreak.

Pudong in Shanghai – from swamps …

Several buildings are recognizable at first glance on the other bank: the World Finance Centre (or the bottle opener), the Oriental Tower and the Shanghai Tower, the last – for the moment – of the Pudong skyscrapers. I am on the Bund, the former avenue of foreign concessions along the Hangpu River. In front of me is the Pudong district, the international business centre of the city of Shanghai and in a way the image of the city and the country. The omnipresence of Chinese flags on all the old foreign concession buildings gives a rather strange impression of “Chinese revenge” on the rest of the world. China today is no longer afraid of what it is, and is becoming more and more assertive – even a little too much so. And Shanghai has become the showcase of this renewal of Chinese power that began in 1979. The sultry Shanghai of the 1930s has given way to ultra-modern Shanghai. The city seems to be the new Eldorado for adventurers from all over the world.

“The skyscrapers have sprung up like mushrooms. It’s amazing how much has changed in this city in such a short time. It’s not only in Pudong that there have been the most changes. And especially not in Shanghai! “Sophie – her French name – assures me, in front of my amazement of Shanghai. “You have to go to the suburbs of Shanghai to understand how much the city has expanded, and all in the space of a decade! From one of the towers of Pudong, you can easily see it”. Sophie is not from Shanghai, like many people in the city, but comes from the neighbouring province of Jiangsu. So she is dependent on the Chinese “hukou” (戶口簿) system. “But here, you can find work more easily than elsewhere”.

After graduating from a business school in France and now working for an international import/export company, she came to Shanghai for the ease of finding a job and for the international context of the city. In the early 90s, the Pudong district was just a swamp on the Hangpu River, with old factories and lots of fishermen’s huts. It’s hard to imagine that when this ultramodern business centre is facing me only twenty years later. It was only after some thought on the part of the leaders that Pudong was developed as a special zone. Thanks to Chinese magic, the area has become China’s economic centre and its leading stock exchange in just a few years. Every year, a new skyscraper is built that is supposed to be bigger than the previous ones. “All companies have an address in Shanghai if they want to do business in China. It’s like having a shop on the Champs Elysée in Paris for luxury brands. This is where it all happens,” she continues. “But Pudong is still the place where you see these changes best. And it won’t stop because the future will be with China. Sophie doesn’t hide her enthusiasm, and as we talk, I notice a small hint of patriotism and pride in today’s China. This will remain a common thread among many Chinese acquaintances. So the communist education seems to be working perfectly.

We stay there, on the Bund, talking about everything and nothing. Around us, families and friends crowd to take pictures in front of the fabulous towers of Pudong. The hours pass. The breeze continues, watch got season 7 live the crowd starts to become less oppressive. It’s almost nine o’clock and the boats are also starting to be scarce. We decide to leave the Bund to find a restaurant, Chinese of course. Shanghai is not sleeping yet, and according to Sophie it will be a long time before it does.