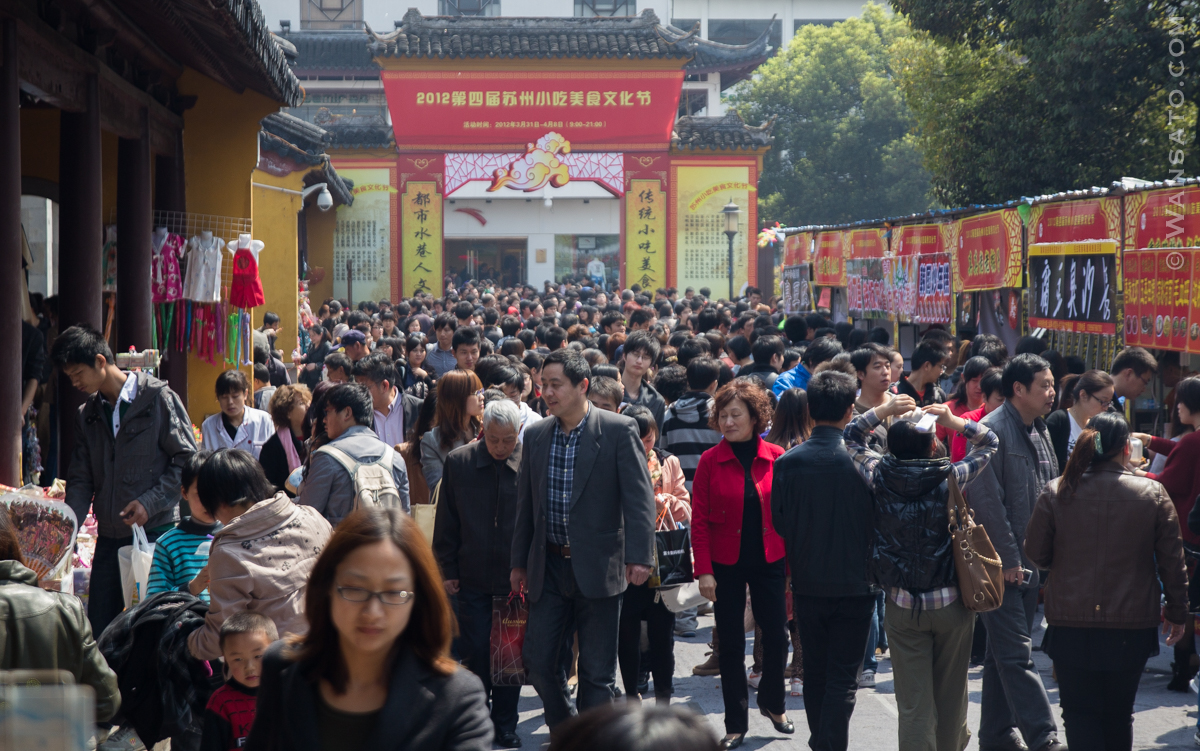 The Qingming Festival is an important festival in the Chinese calendar. Every year in early April, millions of people gather throughout China to pay tribute to the elders.

unday afternoon. A glance to the right, then to the left. Nothing can be done, the flow is incessant and all these people who make up this human river seem to go nowhere and everywhere at the same time. The gongs can be heard in the distance and the pleasant smell of incense begins to be perceptible, brought into the street by a small breeze.

The small street opposite is quieter, but is inaccessible without passing through the crowded avenue. I try my luck anyway, and get carried away by the continuous flow. After five minutes, the pace seems to slow down as the crowd becomes more and more dense. We are getting closer to the temple and the city centre. The weather is beautiful in early April. The cherry trees are in bloom, highlighting and sublimating the old canals of the city of Suzhou (蘇州 in traditional Chinese), in Jiangsu province, China.

But what is going on this afternoon? Why are all these people outside? Is this normal for a Sunday? All these questions remain unanswered for now. The shops are open, the restaurants are full, and the temple is overflowing with people. The whole city is celebrating. This is when it is easy to realise that China is a very populated country, very populated indeed. At the Taoist temple nicknamed the “Temple of Mystery” or 玄妙觀 ( Xuánmiào guān in pinying) located in the centre of Suzhou, most Chinese come to burn incense and pray. Unfortunately, you have to pay to enter the temple. But it helps to explain the smells in the street and the melody of the gongs heard earlier.

Trees still bare from the cold winter so close by stand in front of the temple, and under their protection, many benches, an ideal observation point. Most people are surprised by my presence. They laugh when they see me and ask if they can take a picture with me. I gladly accept. I feel like the only foreigner in Suzhou in the early afternoon.

Armed with my rudimentary Chinese, I ask them what is going on. They are surprised that I speak Chinese and I am even more surprised that they understand me. – Jie! Qingming jie!” a young girl tries to explain to me, embarrassed and snuggling up to her boyfriend. – What? Jie? “. – Qingming jie! “she repeats to me mechanically several times. I think for a moment. “Ahhhhh, festival! Qingming festival,” waving fireworks at me. She nods and her boyfriend laughs at her embarrassment (or at my mimicry!). I thank them and continue on my way through the back of the Suzhou Mystery Temple. A festival? The Qingming festival? That would explain all the people in the old town of Suzhou and around the temple.

I would only know when I got home that the Qingming Festival (清明) is one of the most important festivals in Chinese culture. It is celebrated every year a fortnight after the spring equinox – so on April 4-5. This festival is also known as the “ancestors’ day”. It is an opportunity for families to get together and clean the graves of their ancestors, or to pray in one of the (few) temples in China. This day became a public holiday in China in 2008. It has also been a holiday in Taiwan since 1975, to honour the death of Chiang Kai-shek.

The most surprising thing is certainly the opening of all the shops in Suzhou during the Qingming festival. One might expect a certain “pietism”, like for Easter or Christmas in France, but it is absolutely not the case. In fact, it is during these few days that the street wedding shops seem to be more numerous than usual. They offer to turn every Chinese woman’s dream into a fairy tale: white dresses, wedding photographs, gargantuan meals, and western-style wedding halls have become the norm in China. Most Chinese take advantage of this short period to go out with their families or couples, the majority living too far away to return to their home town or village to look after their family’s graves. The traditional shoe and clothing shops are also very busy, as are the hawkers.

After a few hours of strolling around the city, eating beautiful little rice dumplings stuffed in the back of the Mystery Temple and discovering a side of Chinese culture I didn’t know I had, it’s time to get back on the bus and go back to the lifeless district that is the SIP. With the impression that in the end, the Qingming festival is a Sunday like any other in Suzhou, but with more onlookers than usual. And a bit more incense all the same!