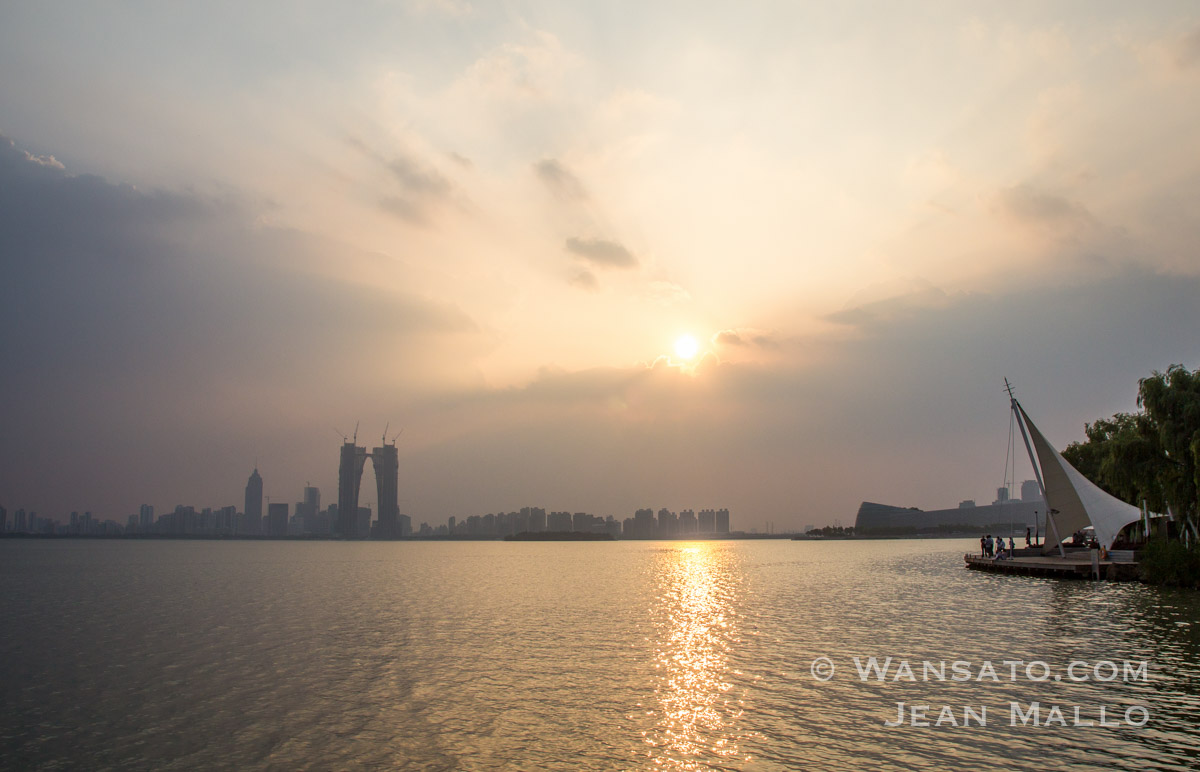 The city of Suzhou is considered in China as the Venice of the East. Next to the city is the Shihu Lake, which has become a popular place for Chinese people in need of greenery. So much so that it is not uncommon to see future brides and grooms having their photo session on the banks of the lake.

he weather is heavy, almost suffocating. The humidity is omnipresent. The slightest movement requires extra effort due to the heat. Clothes stick, skin is clammy. The sun is nothing more than a yellowish, transparent, round ball. The pollution must have something to do with it. The clouds are beginning to conquer the sky. The fight between the sun and the clouds makes for a magnificent scene, for those who take the time to contemplate it. Storm, not storm?

The sky becomes threatening, the clouds grow in the distance and their shadows seem to engulf the small town of Suzhou. The battle seems to be lost in advance, after all. Yet everything is extremely calm. The wind plays its most beautiful melodies with the leaves of the trees and gently caresses the immense fields of grass, blowing twigs and plastic bags along the way. On the surface of Lake Shihu, the ripples caused by the wind seem to be the work of a Chinese dragon fluttering on the surface of the water, the place and the atmosphere being conducive to such an imagination. The calm before the storm, no doubt. And an ordinary evening in Suzhou, after all.

A 30-minute walk from the SIP is enough to get to the shores of the beautiful Shihu Lake. The Ferris wheel is a very good landmark to avoid getting lost in these huge avenues, which are so similar to each other. The crossing of several construction sites, meadows and middle class Chinese housing estates to get to the lake leaves a mixed impression. Few people in the avenues. A way of life that corresponds more to Uncle Sam’s, where the car is king. Construction of housing estates at full speed. China is changing, and changing fast.

On the shores of Lake Shihu, several signs forbid swimming. Not that the Chinese don’t know how to swim, let’s just say that there must be other unofficial reasons. The pollution of Lake Shihu, for example,” suggested a colleague. The Jiangsu region is known throughout China for its countless lakes and rivers. Unfortunately, it is also one of the most industrialised regions, from which its well-known neighbour Shanghai benefits. The ecological sacrifice for the economy is visible every day in China, also in Suzhou.

Few people walk on this part of Shihu Lake, too far from the bus and underground stops, no doubt. The rare people are joggers who take advantage of the impeccable layout of the shoreline to do their usual kilometres. This makes it possible to enjoy the splendid view of the entire lake in peace. In the distance, the Ferris wheel is still there. Curiosity prevails and this Ferris wheel becomes an obsession, the goal of the walk. It seems so close and yet after ten minutes of walking, it does not seem to have come any closer.

At the edge of a small creek, behind the vegetation, laughter and giggles can be heard. To our surprise, on the shore of the lake, we witness a wedding photo session. The beautiful young bride in her green dress lets herself be photographed in her best light. The photos will undoubtedly be successful, as the light at the end of the day is so beautiful. The assistants and the groom wait patiently behind the photographer, soaking up the heat. Suzhou is known throughout China as one of the most beautiful destinations for wedding photos and as the place where the most beautiful wedding dresses in the Middle Kingdom are made. Some Chinese women do not hesitate to come from far away to Suzhou to buy a dress. A whole part of the city is devoted to the manufacture and weaving of dresses. Three more couples appear on the shore, all closely followed by photographers and their assistants. Of course, for us westerners, the choice of colours for some of the costumes can be perplexing. The Chinese like exoticism, and it shows. Considering the number of photographers and couples we will meet during the whole evening, we are not worried about the wedding industry; it seems to have a good future in China.

The Ferris wheel finally stands proudly at the end of the riverbank. The setting sun creates a Chinese shadow with the buildings on the other side of Lake Shihu. This Ferris wheel is part of an amusement park that strongly resembles a copy of Walt Disney’s parks. Not sure, however, that the real Mickey would have been thrilled to meet his Chinese twin brother, let alone Pluto. Western-style castles don’t exist in China, so the park’s wooden backdrops are perfect as a background for wedding photographs.

“Hello, where are you from? The stranger’s approach is direct, but works. “Oh, are you French? What are you doing in Suzhou? Would you like to walk with me for a while? “. Having our picture taken with a group of young Chinese people has become a habit, but it is with equal curiosity that we make a path together, along the banks of Shihu Lake. “I’m studying at Suzhou University, I’m doing a master’s degree in English, but I’m from the neighbouring province of Zhejiang, in the south of Jiangsu. There are not many foreigners here! “. We had a little chat by the lake, then in one of the posh restaurants in Moon Harbor, an ultra-rich district of Suzhou, very close to Time Square and its luxury boutiques. “I have to go now, thanks! “. The foreigner disappears as quickly as she came, without leaving us her name. A strange feeling comes over us. That the Chinese always hide a reason, a goal. Of course, this behaviour can be found everywhere in the world, but in China it seems more pronounced. And the art of hiding one’s intentions is naturally found in the Chinese language. In this case, it is obvious that she took advantage of our presence to perfect her English. Our colleague will confirm this impression, although it is easy to generalise quickly. This was undoubtedly a first immersion in Chinese culture and all its ambiguous notions.

The night reveals the lights of Suzhou’s old town, on the other side of Shihu Lake, as well as the two gigantic towers under construction (in 2011 at least), which will be Suzhou’s tallest buildings. Locals come to stroll along the waterfront, wealthy Chinese and foreign tourists occupy the best bars and restaurants in Moon Harbor. Elsewhere, photographers continue to shoot newlyweds. The heat has hardly gone away despite the nightfall. Eventually, the storm breaks in the distance, but Suzhou, for the moment, remains dry. An ordinary evening in Suzhou, after all.