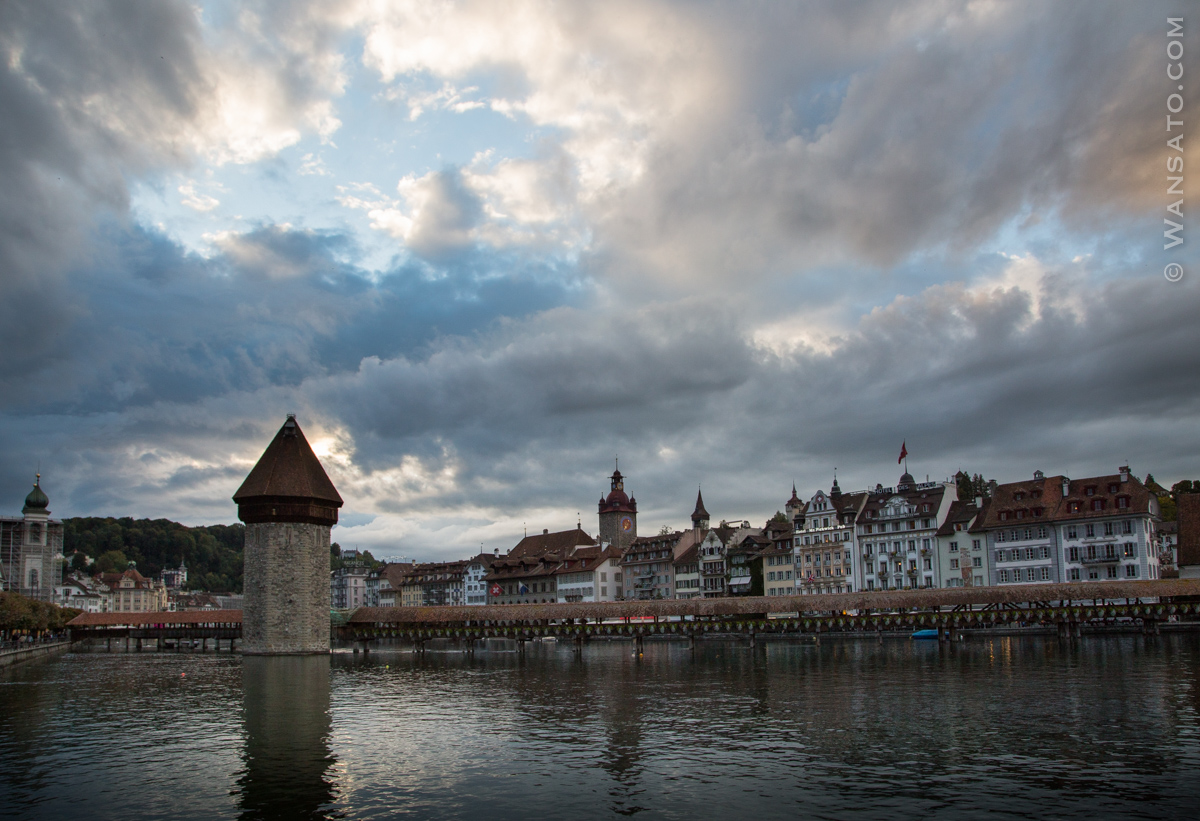 At the foot of the Swiss Alps lies the beautiful city of Lucerne, in the canton of the same name. Famous for its carnival that rivals Basel, and its unique covered wooden bridge, Lucerne is a well-known destination for tourists visiting Switzerland.

he old medieval city is adorned with its artificial lights, as the sun hides behind a dark curtain of clouds. Above it, darkness seems to float. The black clouds swirl and dance in the wind. They form the vault of what looks like a cathedral of water and light. The shafts of light are the stained glass windows of the cathedral and illuminate the old buildings of the city of Lucerne.

Lucerne is without doubt one of the most beautiful cities in Switzerland. The buildings dating from the Middle Ages are numerous and above all very well preserved. Lucerne is the capital of the canton of the same name and was the first city to join the Confederation of the Three Cantons, the forerunner of the Swiss Confederation of today. Despite the rain, tourists came to Lucerne in large numbers. Usually only Swiss people and a few busloads of Chinese tourists visit Lucerne – and Switzerland. The cost of living in the Swiss country is probably a big reason for this. As elsewhere in Switzerland, the train is the ideal way to get to Lucerne, especially when travelling to Ticino from northern Switzerland. Situated at the foot of the Alps, Lucerne offers sublime mountain views when the weather permits.

In the distance we can already hear the dull hum of the boat’s engines. A few hours earlier, during a beer, the storm was rumbling and the rain was pouring down. It was impossible to visit the centuries-old city and to appreciate its sublime walled city architecture. That’s for another time. Along the Rathausquai and Unter der Egg, in the heart of Lucerne, are the best bars and restaurants to enjoy the beauty of the city and its famous buildings: the Kapellbrücke, St. Peter’s Chapel, the Jesuit Church. This is the most touristic place in the city.

The boat and the meal are waiting for us. A trip on the rough waters of Lake Lucerne in one of the many restaurant boats. The meal lasts two and a half hours and the fajitas will be the highlight. Unfortunately, the weather does not allow us to enjoy the crossing of Lake Lucerne to the full, especially as it is getting dark quickly in November. These few hours in Lucerne are therefore only a glimpse of this magnificent city. With spring comes the sun, and with it a visit to the city and the famous Pilatus mountain.