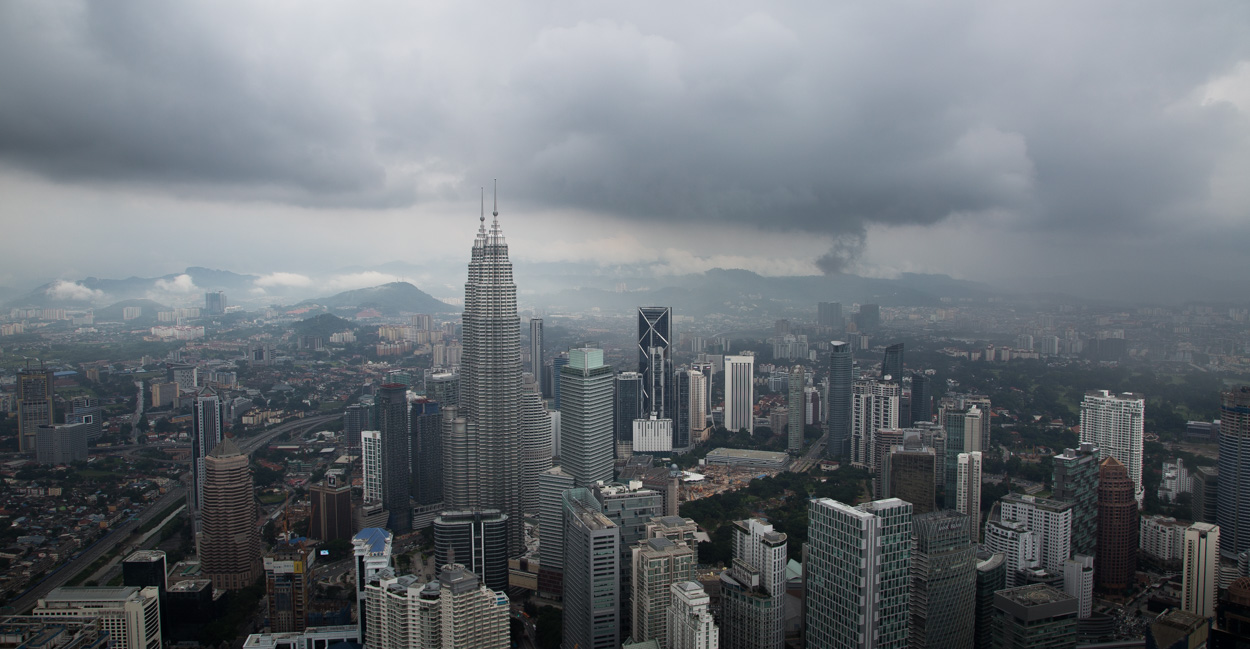 Although the state religion of Malaysia is Islam, the Batu Caves north of Kuala Lumpur form the largest Hindu temple outside India, guarded by the majestic statue of Murugan, god of the divine army in the Hindu religion.

hen the doors open, the city suddenly appears, as far as the eye can see. This one is very quickly buried under the mist and the clouds, as if they announced the end of the world. Rolls of dark clouds melt over the chain of buildings and houses that make up the city of Kuala Lumpur and it would take nothing to be swept away by torrents of rain. It’s as if it were nightfall, even though it’s barely three in the afternoon.

“Hello, leave your bags here, please”. After a few seconds of elevator ride to the top of the Menara Kuala Lumpur – commonly known as KL Tower – the guards in front of the exit make sure no tourists take bags on the walkway. “It’s because of Base Jumping. We’ve already had people jumping from here,” one of the guards tells us in broken English. Base jumping is the practice of parachuting from tall buildings, towers or cliffs. Of course, most jumps from buildings or towers are illegal (except for special events), but that usually doesn’t stop Base Jumpers. The KL Tower was built on a hill overlooking Kuala Lumpur and is over 335 meters high in total – more than 421 for the antenna. No wonder it attracts all the thrill seekers. Completed in 1996, it offers one of the most breathtaking views of the city.

Kampung Baru, the soul of Malaysia

After getting lost more than once in the city, it is easy to realize from the top of the KL Tower how complex – almost anarchistic – Kuala Lumpur is, but which strangely enough gives it a certain charm. Kuala Lumpur is a real anthill and a crossroads of cultures, which the lack of urban plans encourages to discover. To go from the Chinese district to an Indian temple is done in a few streets, which you can see very well from the KL Tower. In the middle of all the “modern” buildings and shopping malls representing the rapid evolution of Malaysia, there is an old Malay district, the Kampung Baru district. This district is composed of old villages that have, since colonial times, a veto right on all new constructions and developments in these villages. It has therefore survived, as if by miracle, the modernization and especially the appetite of real estate developers. Just a stone’s throw from Kuala Lumpur City Center, Kampung Baru represents the peaceful and authentic life of Malaysia in the past. This area is considered the Malay soul of the city, with its traditional Malay houses and gardens filled with coconut and palm trees. A district that must be discovered after sunset for its night market, street food and endless shopping.

The caves of Batu, a part of India in Malaysia

In the distance, nestled in the mist, a rather strange shape overhangs the rest of the city. A mountainous massif stands out very clearly from the rest of the plain. They are the caves of Batu. Lost at more than nine kilometers from the city center, these caves form the largest Hindu temple outside India and are guarded by the majestic statue of Muragan. This one looks at the crowd from its forty meters high, holding in his right hand his spear which was used to defeat the demon Surapadman and restore the balance of the world. During the festival of Thaipusam, which takes place during the full moon of the Tamil month (around January-February), a procession starts from the Sri Mahamariamman temple and ends in the Batu caves to celebrate Muragan’s victory over the demons.

Behind the imposing statue is a staircase of more than 200 steps which leads directly inside the caves. In addition to being rather raid, this one is crossed by a small crowd of furry guards, who will not hesitate to harass (even attack!) all those who go to the temple.

At the price of a certain effort, the interior of the caves of Batu appears finally, and this one does not leave indifferent, so much by the splendor and the immensity of the caves. For a moment, the traveler could be confused and have the impression to travel in India. The caves of Batu are a succession of main and secondary caves, the temple dedicated to Muragan being located in the last of them with a gaping opening towards the sky. On the walls of the caves is told the story of Rama – mythical king of ancient India – with the help of sculptures. Outside there are many small restaurants typically Indian to replenish the horde of faithful who come every day to pray in the temple. Very easy to reach, the Batu Caves are one of the must-see attractions for any stay in Kuala Lumpur.

On the way back, a small detour to the Little India of Kuala Lumpur. The Indian minority is the third largest ethnic group in Malaysia, even if they are less numerous than the Malays or the Chinese. The district where the majority of Indians live is located near the chinatown and the Sri Mahamariamman temple. After visiting the caves of Batu, nothing is more normal than to end up in one of the countless restaurants in the area. With, as a rule of thumb, that the best restaurants are those where the locals eat.