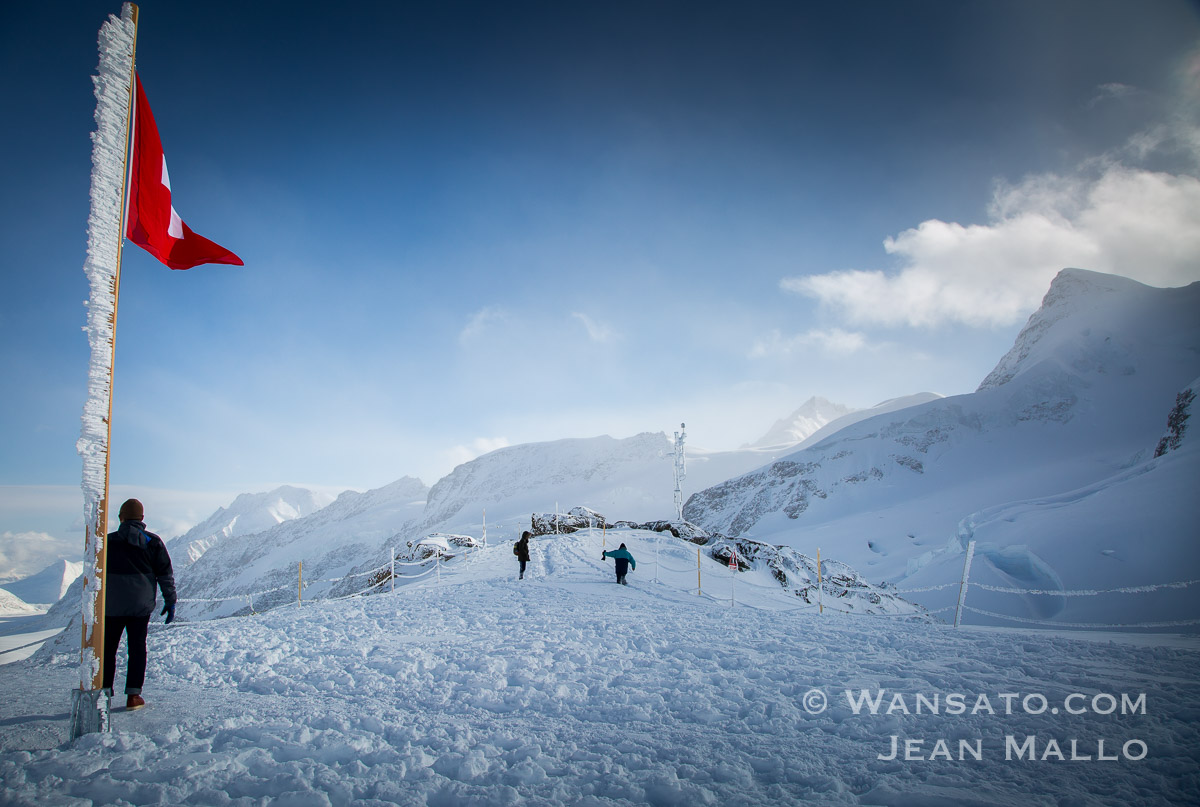 The snow-covered peaks of the Jungfraujoch are one of the favourite attractions for tourists visiting Switzerland. Snow, wind, sun and mountains all combine to make this an unforgettable adventure.

t is cold. As soon as we step outside, the icy air starts to make itself felt. The wind rushes through every little opening in your clothes until it freezes your soul. A badly put on T-shirt is not forgivable. A few more minutes are enough to numb the fingers, which must be constantly warmed up by frantically clapping. Even the jeans start to stiffen under the gusts of wind and a thin white film forms on all the clothes.

There is no escape up there. The gusts of wind blow the snow away until it completely covers the surrounding peaks. It’s like being in the middle of a snowstorm. Visibility is almost zero. One more step and it could be the last. Then the sun reappears and warms up the only people who had the courage to go so high. It is minus eighteen degrees at the top of Europe.

In front of us lies an almost immaculate white ocean, punctuated by brown reliefs similar to reefs in a rough sea. The gusts of wind raise snow tornadoes like the foam of the waves in a storm. Yet everything seems calm and peaceful after these mood swings of nature. An irresistible feeling of wanting to go and meet this monochrome immensity appears in us, of being the first to tread this place which seems so far from any human presence and which man has not yet managed to tame. A virgin place that we would like to discover. At times, the field of vision is disturbed by small black balls floating in the sky. Even at this altitude of over three thousand seven hundred metres, life is present. The closer the balls get, the more we understand that they are birds flying in the gusts.

At the top of the Alps

Back to reality when a group of Chinese tourists is heard on the bridge. The end of a little moment of reverie where everything seemed possible and where the mind sailed among dreams and stories of adventurers. Outside, the Sphinx Observatory bridge, which clings to the top of the pass, offers visitors an almost 270-degree view of the entire Jungfraujoch region.

On the one hand, the famous Aletsch Glacier, a World Heritage Site, was the subject of a campaign by American photographer Spencer Tunick and Greenpeace. At this event, more than six hundred people posed naked in front of the glacier to denounce global warming. The Aletsch glacier is surrounded by four-thousand-metre peaks such as the Eiger, the Jungfrau and the Mönch, on the border between the cantons of Bern and Valais. On the other side, the splendid valley where Grindelwald and some small villages are located. Unfortunately, the clouds that roll up the mountains often obstruct the view.

It was not until 1862 that two teams of experienced mountaineers set off from Grindelwald and reached the peaks surrounding the Aletsch glacier. Thirty years later, construction began on the train to the Jungfraujoch Pass and its station, still considered the highest in Europe today. The project, which was unbelievable for its time, was the brainchild of Adolf Guyer-Zeller, an industrialist from the Zurich region. Despite several years of delay due to numerous accidents and financial problems, he succeeded in completing the tunnel under the Eiger and Mönch in 1912.

Since then, the Jungfraujoch railway station has become a landmark in the region and is well known. It is connected to several buildings and platforms that tourists can visit. The most impressive place is undoubtedly at the top of the Sphinx Observatory. It is one of the highest astronomical observatories in the world and is directly accessible from the station by lift. The more courageous can also explore the surrounding area via one of the station’s exits, including the rock platform on which several pillars proudly display the Swiss flag and all the measuring instruments needed for meteorology.

Being in the middle of the snow, surrounded by immense peaks, is impressive and gives the feeling of being just dust in front of this spectacular and terrifying nature. In summer, when temperatures are much milder, it is possible to trek from the Jungfraujoch to some of the huts further along the Aletsch glacier.

The train, gateway to the Jungfraujoch

After more than an hour of close proximity to the mountains, it’s time to head back down to Interlaken. With a great rail network, it is very easy to get from one destination to another by train and bus, provided you can afford to pay a certain amount. Switzerland is one of the safest countries in the world, although for many Swiss people this situation is gradually deteriorating. Above all, Switzerland can boast that it has not been at war for more than 10 years (just like Japan, Qatar, Panama, etc.).

But above all, it is a country where the standard of living is one of the highest in the world. Switzerland’s two main cities, Zurich and Geneva, are often listed as the most expensive cities in the world. No wonder it costs more than two hundred Swiss francs to travel to the top of Europe. It is also not surprising that the vast majority of tourists visiting the Jungfraujoch are local Swiss or Asian tourists, the majority of whom are Chinese. Chinese tourists only spend a few days in Switzerland and the Jungfraujoch remains a must-see destination for these tour operators.

A change of train at the Kleine Scheidegg station and we are on our way to Grindelwald. The train slowly descends the hill, showing its dreamlike landscape in front of the train’s large windows like a film. On the surrounding mountains, the sun is also setting, casting the last rays of sunlight of the day. But a part of us seems to have stayed up there, in the mountains and the snowy peaks, in the company of the birds that flutter in the gusts. Perhaps they are the only ones who can overpower the mountain.