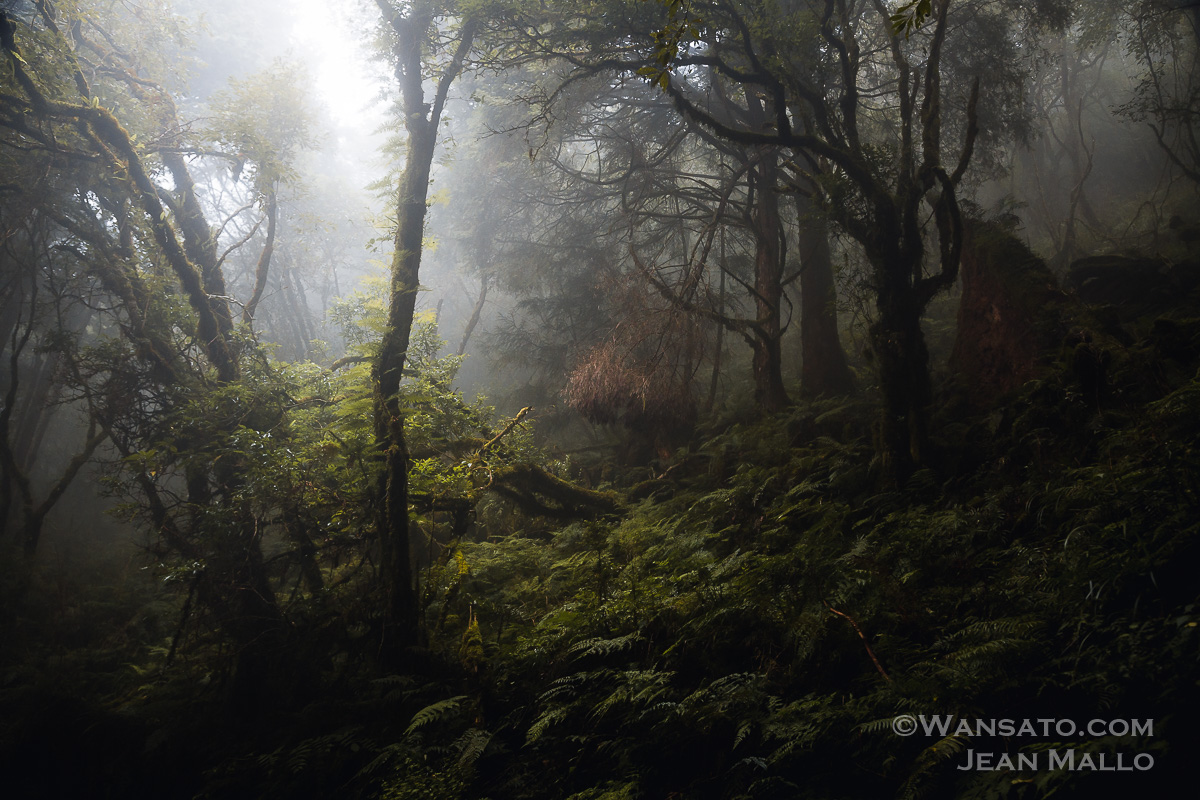 In the highlands of Taipingshan Mountain in northeastern Taiwan – near Yilan, the historic Jancing Trail is best known for its ancient railway ruins. The result of a long history of deforestation, the Jancing Trail used to connect the Taipingshan peaks with the nearest town for the transport of timber.

fresh mountain breeze is felt. Up there, it can’t be more than 24 degrees. All around us, a whitish mass keeps stirring in all directions, bringing a few strands of coolness. At times it seeps through the trees, whistling through the leaves. The humidity is even more noticeable here, even if it is mistaken for a light rain. The clouds have descended from the sky to greet us at the entrance to the historic Jancing trail.

At times we can only see about ten metres in front of us. We are completely immersed in the forest, with only the path disappearing around a bend in the distance as our guide. The atmosphere is mysterious. The forest and its luxuriant vegetation surround us. The silence. We hear the branches and wet leaves crackling under our own footsteps. The melody of the birds does not reach us. We hear ourselves breathing. The silence is deafening. It is only broken when we pass a few hikers on the trail. Beyond the trees, white nothingness. Everything comes together to give its almost whimsical charm, a Chinese mountain painting.

After about ten metres, the first rails of the old railway appear. Deformed and rusted by the countless years. The metal that makes up the rails seems to be in relatively good condition, but the wooden sleepers seem to have suffered after more than a hundred years of facing the elements. Especially in the face of the powerful typhoons that plague the Pacific every year. The 900-metre long Jancing trail unfortunately did not entirely withstand Typhoon Megi in 2016, which washed away a large part of the trail.

The unfortunate story of the massive deforestation of the Taipingshan forests – and that of the Jancing Trail – begins with an equally unfortunate story: the extermination of Taiwanese aborigines by the Japanese colonial government. In 1910, Japan occupied Taiwan and attempted what the Qing Chinese Empire had never been able to do before: full administration of the island. That year, after having driven out/exterminated several aboriginal peoples such as the Shiki, Manoyuan or Namsam along the Lanyang River – near Yilan, in the east of Taiwan – the Japanese made an important discovery somewhat by chance. The surrounding mountains are full of red formosan cypress trees, a species unique to Taiwan. There are only a few species of giant cypress that survived the last ice age in the world. These trees need constant altitude, temperature and humidity all year round to grow. The oldest known specimens can be up to 4000 years old.

In 1917, the Taiping Administrative Centre was created to begin logging the Taipingshan cypresses. This was followed by 30 years of exploitation and modernisation by the occupiers, who mainly exported this exotic wood to the Japanese archipelago, for example the Torii at the entrance to the Yoyogi temple in Tokyo. The Japanese showed a certain ingenuity to be able to transport the wood from one mountain to another, crossing mountains and rivers. Above all, they built railway lines through the forest to increase the volume of transportable wood, such as the section that will become the historic Jencing Trail today.

When the KMT came to China in 1945, logging did not cease and, on the contrary, intensified. The logging was an important source of foreign exchange and was used to help the development of Taiwan after the Second World War. It increased from an average of 32,000 m2 per year before 1945 to over 39,000 m2 by the early 1960s. As cypress became scarce and was hit by a powerful typhoon in 1968, logging finally ceased in the early 1970s. Since then, Taipingshan National Forest Park has become a major attraction for all tourists wishing to leave the sweltering heat of the streets of Taiwan’s not-so-distant capital, or simply to discover a unique and majestic natural heritage through the many trails.

At times, the rails seem to lean dangerously towards the precipice before returning to the middle of the path as the terrain changes. Then a curve appears. A bend that is far too big for the rails to follow the cliff’s contour. The only solution is to go straight on. The railway line is suspended above a precipice of vegetation by a fragile wooden cathedral built by the Japanese. No doubt it would be imprudent to venture there on foot, as the numerous prohibition signs testify. The whole thing still seems to be holding together, but for how long? How many typhoons will it take to erase the traces of an unfortunate past? Is this past worth preserving so as not to be forgotten, or is it worth being abandoned, as if amnesia were the solution?

It’s four in the afternoon. It is time to go home. As soon as we get down to Yilan, the weather gets brighter and warmer. We leave part of Taiwan’s history in the clouds behind us, hoping that the last Taiwan cypresses can finally rest in peace in the vastness of the Taipingshan forests.