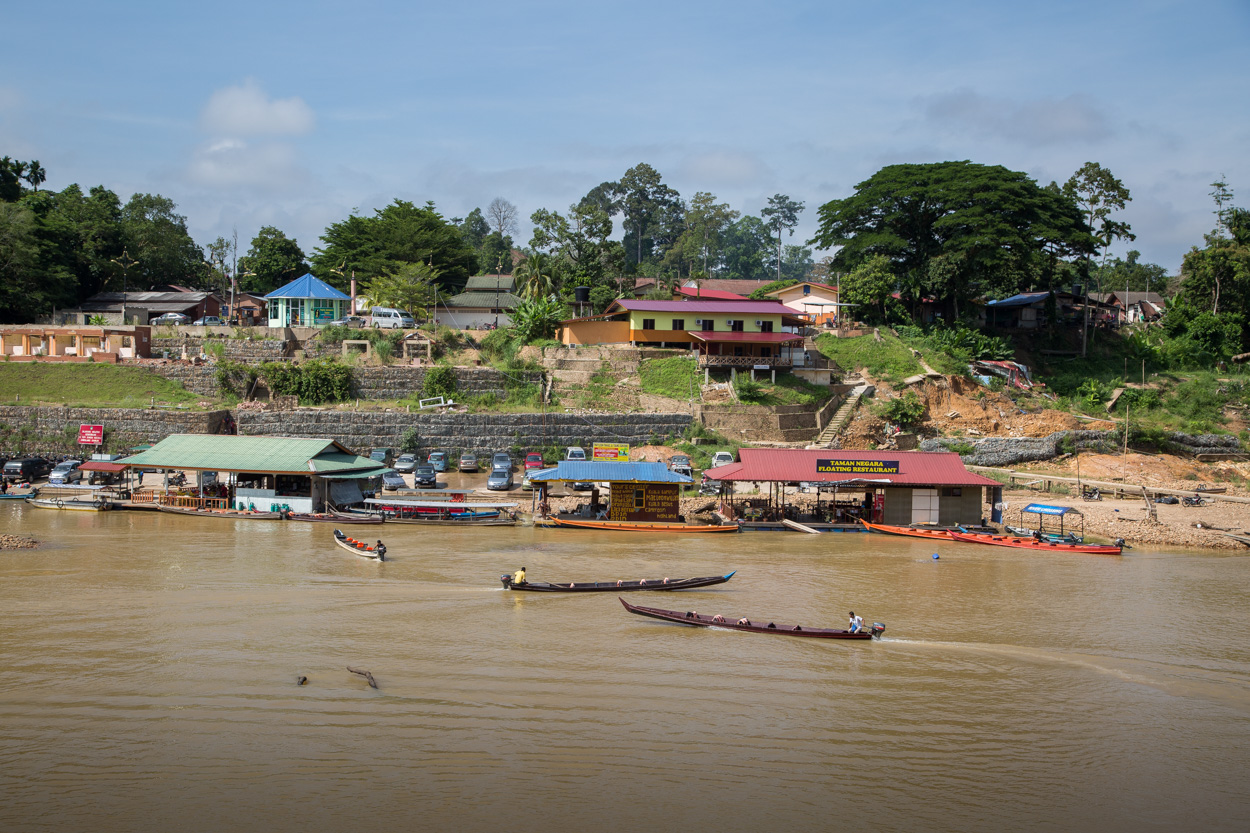 Taman Negara National Park is located in the heart of Malaysia and is the green lung of the country. Considered one of the oldest tropical forests in the world, with more than 130 million years, it has become the last refuge of countless plants and animals.

ver thirty degrees under the shade of the trees, which are probably older than most who can see them. The humidity is also present, so much so that the simplest of movements becomes difficult. “You have to drink a lot,” Matleon warns us. Two liters of water per day, that’s what is advised in these conditions, still it is necessary to carry them.

In front of us, a small river which flows peacefully. It is one o’clock in the afternoon. A small break is necessary after more than three hours of walk in the heart of one of the oldest forests of the world. A short break of barely an hour, the time to prepare the meal and to bathe in the river to refresh. “Once, with a group of hikers, we had met elephants” he begins to tell in English with a strong Malay accent. “They were so frightened that they hoped not to see any more until the end of the trek. Matleon, head of a small trekking agency and hotel of the same name, is a lover of Taman Negara and its forest. In his childhood, he used to hunt the small monkeys of the forest to feed his family. “In this forest millions of years old, it is possible to see tigers, buffaloes, elephants … Unfortunately, the number of animals had decreased enormously when the British had settled in Malaysia. Hunted in their natural environment, the majority of them ended up as hunting trophies. And it’s no better today. “he concludes.

Taman Negara, probably the oldest forest in the world, is also one of the largest national parks in Southeast Asia. With an area of about 4000 km2, it enjoys a record biodiversity, that only a few other regions of the world like Peru, Papua New Guinea, Brazil or Madagascar for example manage to exceed. The place is very famous for trekking, to discover the highest peak of the western part of Malaysia and to discover the fauna and flora of a tropical jungle millions years old. This allows at the same time to contribute to the financing of the rangers and the operation of the park, the entrance of the park costing two-three RMs, that of the photo permit four-five…

… with atypical means of transportation.

Several bus companies offer trips between Kuala Lumpur and Jerantut, almost mandatory step to go to Taman Negara. Without doubt the most atypical and exotic means of transport, going up the Sungain Tembeling river by dugout canoe to reach Kuala Tahan – the real gateway to Taman Negara – takes about three hours, the other way being to take the one hour and forty minute bus. The trip up the river in a dugout can also show the extent of the deforestation of the primary jungle, for the benefit of oil palm plantations, producing “organic” palm oil for the profit of the biggest agri-food multinationals.  A situation that seems to be even worse in Borneo, on the other side of the China Sea.

Kuala Tahan is located on one side of the Sungain Tembeling River, outside the Taman Negara Park. Most of the hotels where tourists stay are located here, as well as the tourist office from which buses leave for Jerantut and Kuala Lumpur. Unfortunately, corruption also exists in this natural sanctuary, and a hotel has been built across the river, directly in the park. “This is the Taman Negara Mutiara. The hotel had put up barbed wire because some guests were complaining about elephants roaming around the hotel, even in the hotel,” says Matleon, sighing. “But they finally removed them, they are still in a natural park where animals are free! “.

Besides trekking, the visit of the canopy or the night walk are very popular activities for families, because they require less physical effort than trekking.

After the meal, we leave for three more hours of walking, going down and up hills covered with thick jungle. “Tonight we will sleep in a cave in the middle of the park. It is also in this cave that the elephants sometimes come to sleep”. Joking? all along the way, in the depth of the jungle, it is possible to see the excrements left by the pachyderms and trees that are left on the ground when they pass. Apart from the rat trying to steal the provisions hung on a branch, the night in the cave passed without any problem. Matleon took the opportunity to tell us about his life, his situation, the flooding that Kuala Tahan suffered a few years ago, the widespread corruption of the government over the country’s resources for the benefit of investors, etc.

After a swim in the small river at the foot of the cave and a few hours of walking, Matleon takes us to see the Batek tribe. “They are my friends. I often come to see them to trade with them” he says while giving them a pack of cigarettes, the entrance fee to the village. “I buy the honey they harvest in the forest, one of the best in the region. I then sell it to buyers in Kuala Tahan”, without forgetting to mention the profits he makes. The Bateks are a semi-nomadic people who live in and around the Taman Negara Park. There are now only about 700 individuals and are considered “Orang Asli”, people of origin. Not being totally cut off from the modern world, they often receive trekking groups and show them their knowledge of the forest: making fire, blowpipe shooting, making roofs for houses etc. “I need to talk to a friend,” warns Matleon, “because it’s important to keep in touch with them. In the meantime, you can take a tour of the village. A peaceful life in the jungle, far from all the hustle and bustle of the cities, the schedules, the visits to the doctor. Here, the only concerns are catching fish or hunting monkeys for dinner, repairing the roofs made of dried palm leaves and smoking local cigarettes while having a good time with the other tribe members. After 15 minutes, it’s time to go back to the hotel in Matleon. A well-deserved rest after two days of trekking in Taman Negara, the forest of millions of years.

The next morning, Matleon accompanies us to the tourist office to book the bus that will take us back to Kuala Lumpur, via Jerantut.  We contemplate one last time the river, from the top of the hill. “Here was the place of my souvenir store” says Matleon one last time, just before our departure from Taman Negara. “All the hard constructions were washed away in a flood never seen before. Only the floating houses resisted. Even the Mutiara Hotel was damaged! But as the corruption continues, they are restoring it, and even enlarging it…”. Matleon signals us, and the bus starts.