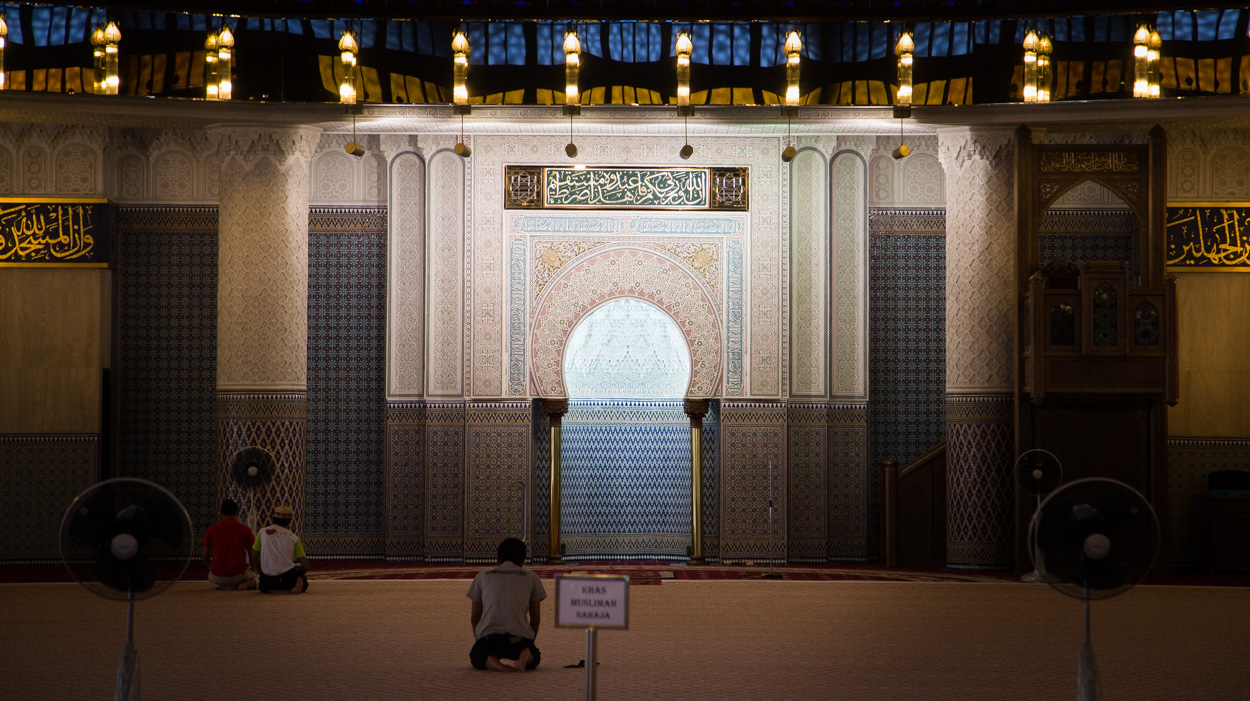 Malaysia is an important Muslim country in Southeast Asia and Sunni Islam is the state religion. The National Mosque in the Malaysian capital Kuala Lumpur is an important place for all Malaysian Muslims and a delight of modernism and architecture for tourists.

Pekeliling bus station, early afternoon. The bus finally arrives, the engine snoring and spitting out all the smoke possible. At the front of the bus, the small sign indicates a multitude of stops, including, in small, “Jerantut”. We ask for confirmation to the cashier of the bus agency, who hides behind his counter, and returns us a positive nod. It is indeed the bus to the famous Taman Negara national park and its thousand-year-old forest, the next step of this trip in Malaysia, but without really knowing what awaits us when we arrive in the park.

The religious heart of Malaysia

Before continuing our trip, we should not miss one of the most visited attractions in Kuala Lumpur: the National Mosque of Malaysia (Masjid Negara in Malay). Malaysia has as its southern neighbor Indonesia, the most populous Muslim country in the world, and has been for many centuries a land of immigration of Islamic populations. Because of this proximity to the Muslim world, the official religion since Malaysia’s independence in 1957 is Islam, and the country applies Sharia law. But contrary to the giant of the south, almost more than the majority of the population is not in fact Muslim, because of the numerous minorities like the Indians, the Chinese and the Thais that the country counts. As a result, there is a tolerance of religious and personal rights that does not exist in many Muslim countries, although there are several controversial laws that favor people of Malay descent who practice Islam, as well as a dual judicial system – civil and Islamic. Nevertheless, for a simple tourist, the most revealing examples of this tolerance are the consumption of alcohol and the wearing of the veil.

For the former, it is tolerated in most places. Alcohol is even very easy to find in Kuala Lumpur, where local mini-markets and supermarkets sell it. However, in some areas, for example in the north-east of Malaysia, it is more rare to find it, or even impossible to buy it in most restaurants. And above all, you have to be careful: if it bothers someone, it is better to wait or leave to be able to drink your favorite beer. As for wearing the veil, many women do not wear it, especially in the capital. And it does not bother anyone. Of course, two weeks are not enough to describe the habits and customs of a country. But for a normal traveler, this tolerance, accompanied with the kindness of the Malay people could pleasantly surprise him. Nevertheless, this tolerance tends to be more and more restricted if we follow the news of the country.

“What country do you come from? “asks one of the guards who watches the entrance to the heart of the mosque, the prayer hall, so that no non-Muslims enter. “Ahhh, France. “he says with a little smile. A small exchange with this South American who studied in the United States and worked for a year in China, but whose name no one remembers anymore. “France has a lot of problems with Islamics, unlike Malaysia. People are closed and have stereotypes because of a few radicals, but they don’t reflect the majority,” he tells us very simply, without malice. This has the merit of being honest, and it is this kind of meeting that allows us to know other points of view. From serious topics, such as the Charlie Hebdo attack or the war in Syria and Iraq, to more pleasant and light topics such as travel and life in China, this meeting was the best part of the visit to the mosque.

The National Mosque is located in the street called Jalan Perdana. It is a modern mosque completed in 1965 and where all the former presidents of Malaysia since independence are buried in the “heroes’ wing”, like Abdul Razak to mention only one of the most famous: Abdul Razak is known for the new plan to launch the Malaysian economy and the (attempt to) solve racial problems. The architecture of the mosque is original and quite different from what the inexperienced traveler might expect. Small basins are everywhere and the architecture is light, without real walls. The prayer hall can hold a few hundred people and is accessible only to Muslims. It is probably the most beautiful and refined room in the mosque. In its entirety, the mosque can accommodate up to fifteen thousand worshippers. The entry of this one costs only a few RMs, but place of worship obliges, the women must veil and everyone receives a purple costume which makes it possible to hide all the parts of the body. The only thing missing is a luminescent saber to allude to the famous Jedi knights.

The central market of Kuala Lumpur

Before going to the Pekeliling bus station and leaving Kuala Lumpur, there is one last place to visit, or rather where to go for any traveler having the problem of not having gifts for his relatives: the Central Market. A real Alibaba’s cave, the explorer will be able to find all kinds of objects as useful as useless: postcards, glass sculptures, wooden statues, old telephones, clothes, shawls, cheap jewelry etc.. The list is almost endless for those who have the patience to browse through the many stores spread over several levels. Easily accessible, the Central Market is located in Jalan Hang Kasturi street. Especially, the streets around are very animated in the evening, and one can find, for the pleasure of the tourists, a small night market where all the flavours of Malaysia are mixed between them.

Once the luggage in the hold, we go up in the bus full of excitement. Visiting the capital is a mandatory step for any trip to Malaysia, and three days are enough to go around the city and visit the must-see places that should not be missed. But spending more time doesn’t seem to be the best idea, knowing that the rest of Malaysia is incredibly beautiful and offers landscapes and places to visit that don’t exist anywhere else. Kuala Lumpur dreams of being able to compete with its closest neighbor, the city-state Singapore, both economically and culturally, and therefore tends to have a certain homogeneity. However, it is important to note that Lumpur has managed to keep a certain authenticity that is unique to it and that gives it a certain charm.

The engine which was sleeping until now wakes up, and spits again all the possible smokes. The bus is about to leave, and with it we leave Kuala Lumpur. Next destination is the center of the country to discover the Taman Negara park, a real joy of biodiversity and heart of Malaysia.